Here's the short version - because I'm pressed for time and more on that later.....

Last Friday I loaded up the Surly Long Haul Trucker with food, tools, camping stuff including a tent, and clothes.  My destination for Friday was Seattle.  25 miles later I was at the hotel.

Saturday I was taking part in the Gigantic Bicycle Festival (Google it.  I'm not going to hot link it).  Though the organizer dude tried to dissuade co-worker Dan and I from riding the 100 mile option (it was either that or 77 miles) fully loaded ("We have a truck to haul your gear!"), riding the 100 mile route fully loaded is what we did.  Every once in a while, masochistic is the way to go.  It's therapeutic - really.

We made it to Snoqualmie OK.  It was good to get off the bike and shower, though.  We did so, found some food, we found some beers, and then listened to some of the live music.

Sunday we walked across the street to the golf course for breakfast.  The Modified Lumberjack (sized) was awesome!

Supposedly we had 31 miles to bike back to the ferry.  A wrong turn, a misplaced trail, and/or road construction later and we added a few extra miles.  I should have ended up with 44 miles for the day.  Instead it was 76.  If my math is correct that means we rode 205 miles on fully loaded touring bikes last weekend.  Even if my math is wrong, that is how many miles my bike computer says we rode.

Oh, for the Twin Peaks fans out there, you should recognize this: 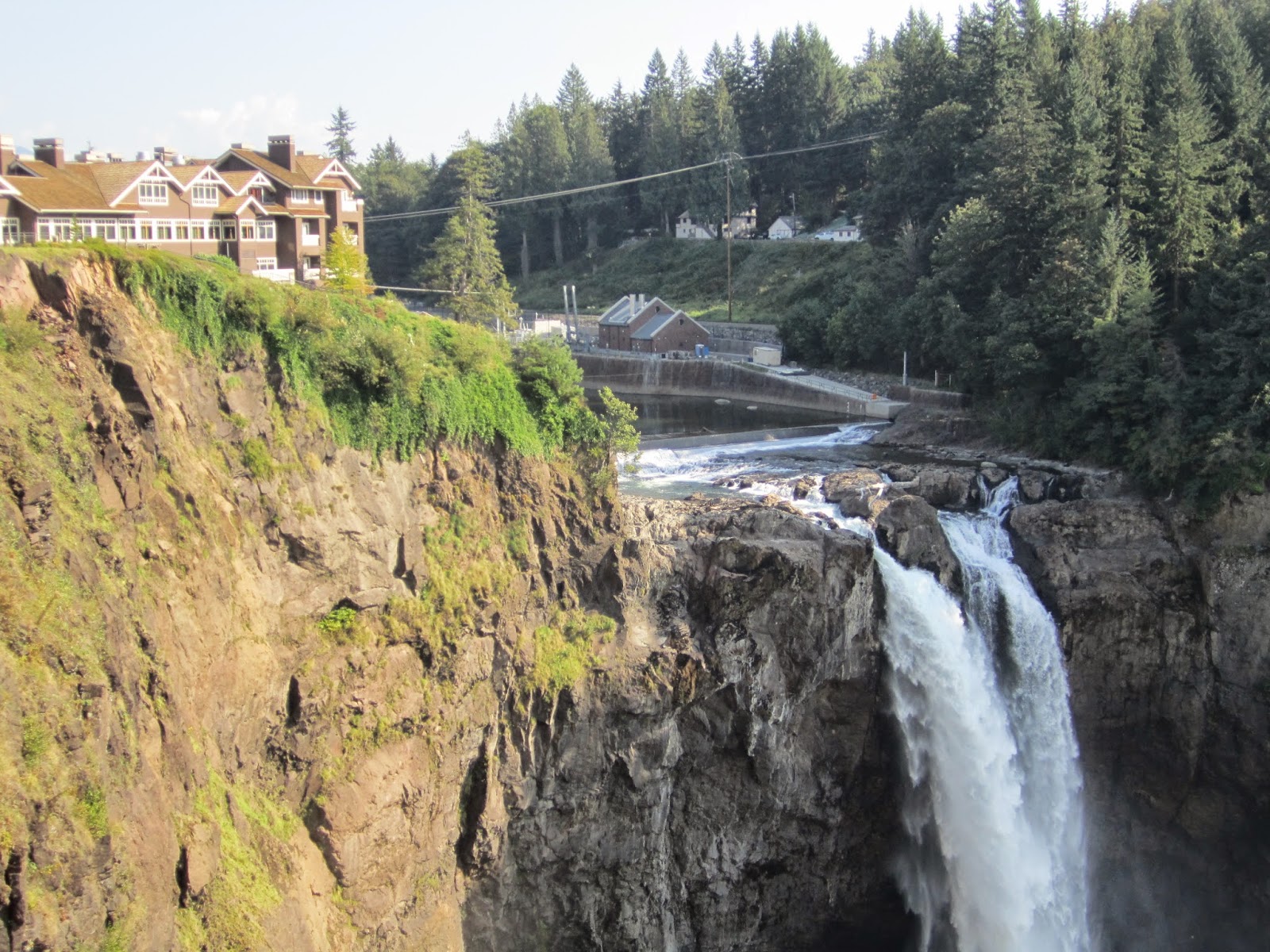 I was too busy riding and such to take too many pictures.  The ones I did take are HERE.

I've today off work and Monday is Labour Day.  For those keeping score - four day weekend!  I'm off to Oregon for some mountain biking and some looking around.  A lot more pictures and full recap (that will put this one to shame) early next week.
Posted by Snakebite at 3:23 AM No comments:

Today I make my way to Seattle via Surly Long Haul Trucker touring bike.  I'll over-night there and then head to Snoqualmie on Saturday for the Gigantic Bike Festival.  Though there's supposed to be transport for one's crap, I'm going to do this ride loaded.  There's a 77 mile and 100 mile option.

Once in Snoqualmie, I'll set up camp and then hit the festival.  There are bands and such.  To use the vernacular of people who are not mine, "It should be a hoot!"

A recap complete with pictures to follow - probably on Monday.
Posted by Snakebite at 7:50 AM No comments:

There's not much out of the ordinary going on since my return from Canada.  There's been work and, or course, the Tuesday Night Mountain Bike Ride.

Starting later today family is visiting for about a week.  That means touristy type stuff.  Maybe I'll have some pictures to share.

Looking forward, the tentative plan is to do a four day tour of Oregon over Labor Day Weekend.  There's some trails I want to explore.  Also, I want to have a good look around at all Oregon has to offer.  I'll definitely have pictures to post if this trip happens.

Updates will happen this coming week but certainly no need to hold your breath for Amazing Adventure.  That's not coming up for a week or two.....
Posted by Snakebite at 8:03 AM No comments:

The week before this past I was traveling to Michigan for work.  I left very early that Monday morning and was due back fairly late Thursday night.  I drove to a park and shuttle type lot near SeaTac airport with the vehicle pre-loaded with bike stuff, clothes, and my passport.  I was going to drive direct to Whistler from the airport upon my return from Michigan.  Then my flight from Michigan was delayed in leaving.

The chain reaction was in motion.  My late Michigan departure meant I missed my connection in Chicago.  My late departure from Chicago put my back to Seattle much later than originally thought.  The silver lining in this traveling dark cloud is there was zero waiting in line at the Canadian border.  Welcome to The Great White North! 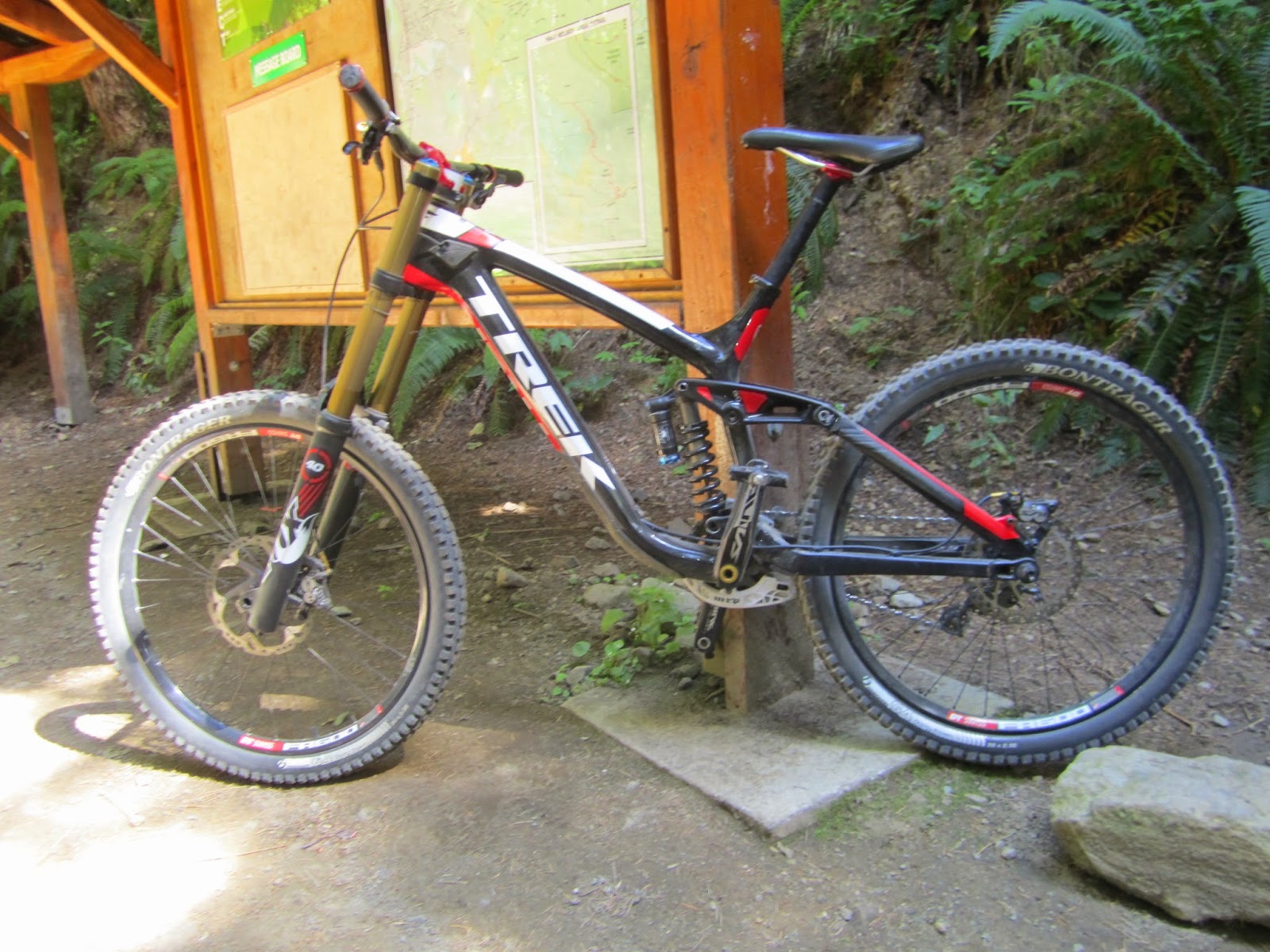 and headed south to Squamish.  I'd heard great things about the Half Nelson trail there. 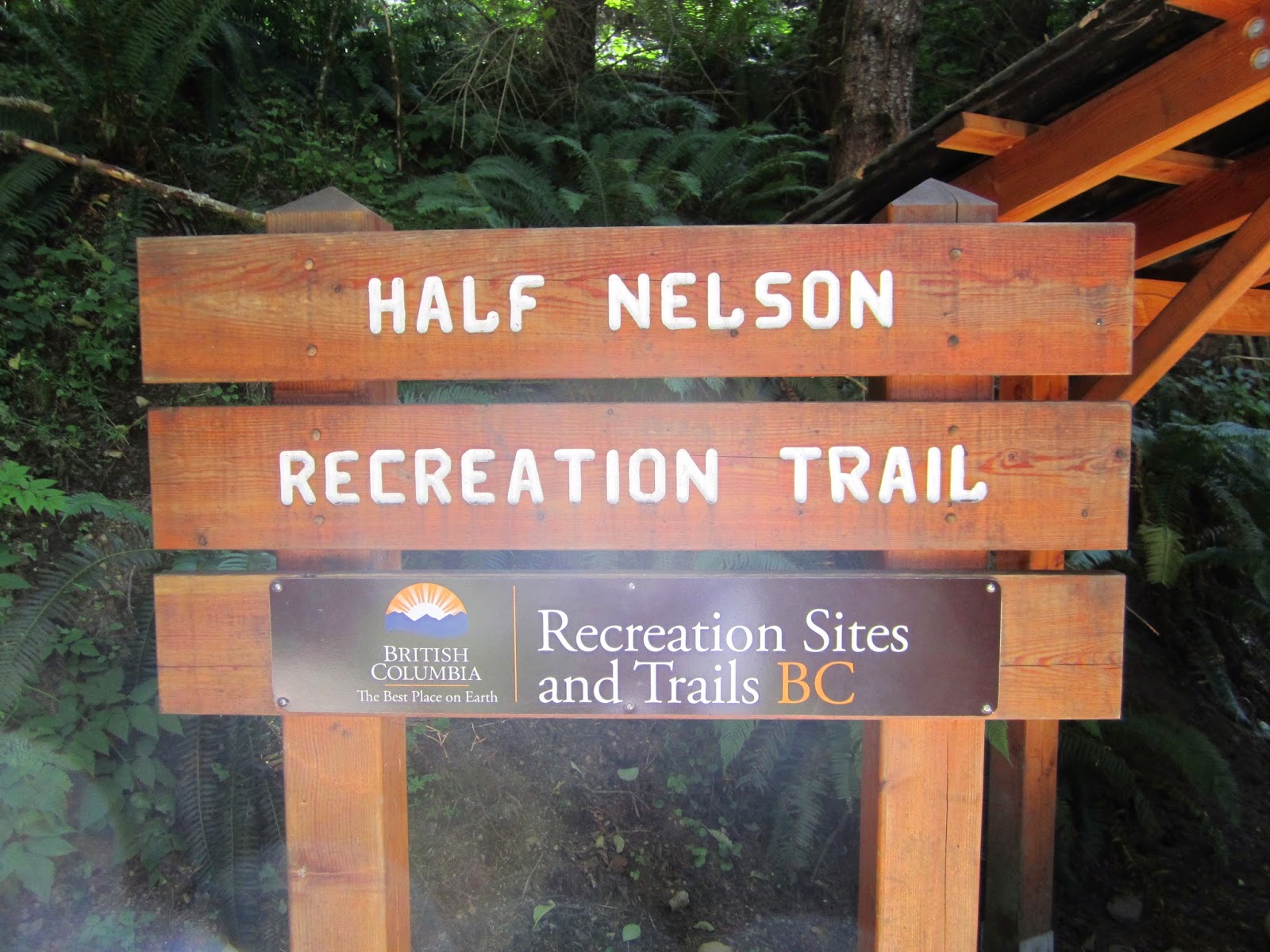 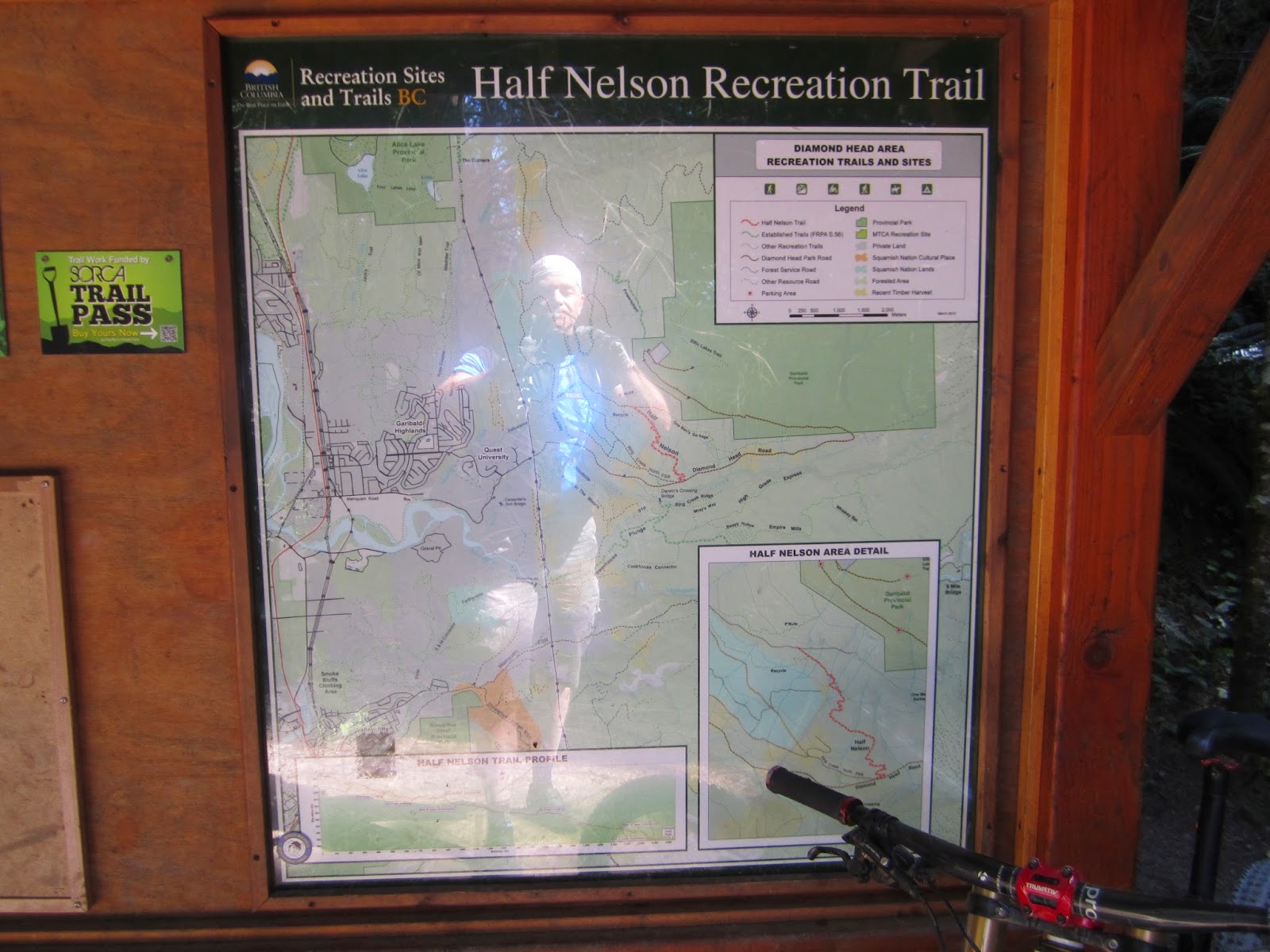 The Half Nelson trail is a very wide, pretty much all downhill, super flowy, mountain bike trail.  You have to grunt ride up a gravel road to get to the trailhead.  Vehicles are not allowed past a certain point - not that I had anyone I could shuttle with anyway.

The bike I choose was a Trek Session 9.9.  It is carbon fiber with eight inches of travel.  It is the only bike of that type, slack head tube angle, lots of travel, that I've ever ridden.  Therefore I can't say it is the best bike ever or the worst bike ever.  What I can say is I thought it a good bike and it served me very well.

A word about bikes like this - they don't climb well.  As in they resist climbing.  The gravel road was steep at times.  Where I would have just geared down and spun up it on my cross country bike, I found myself walking sections with this bike.  The other side of the story - coming down was FUN! 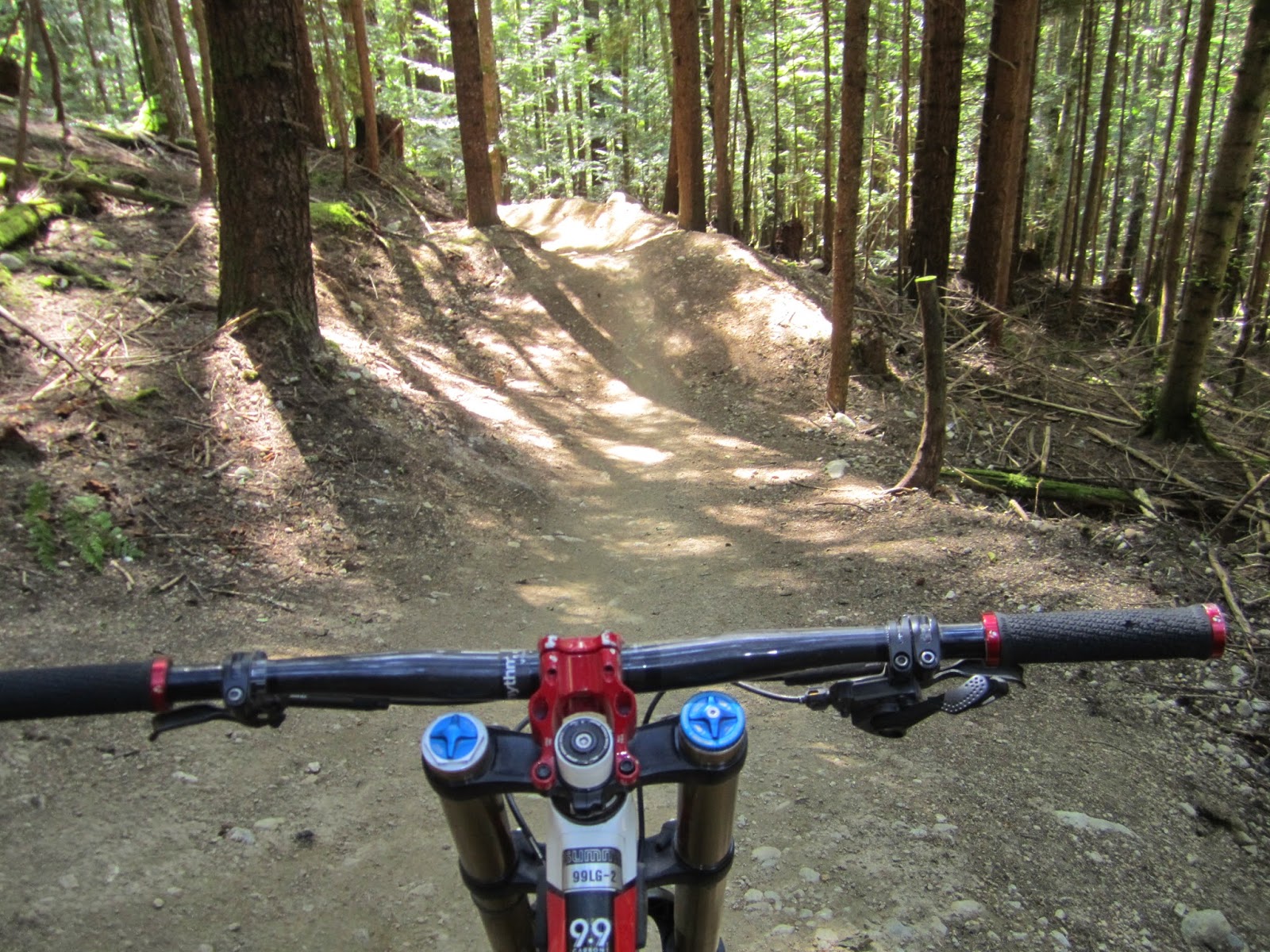 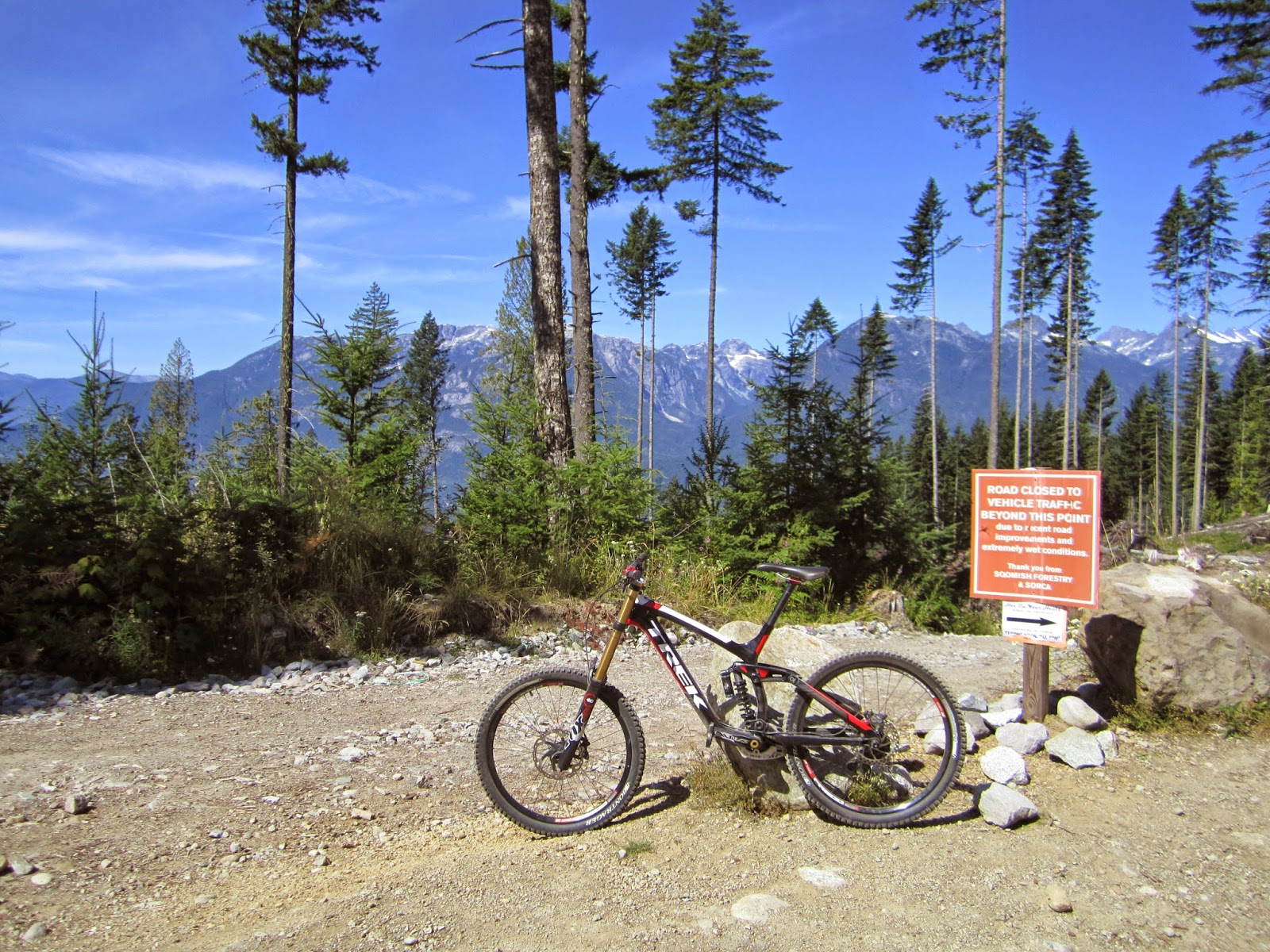 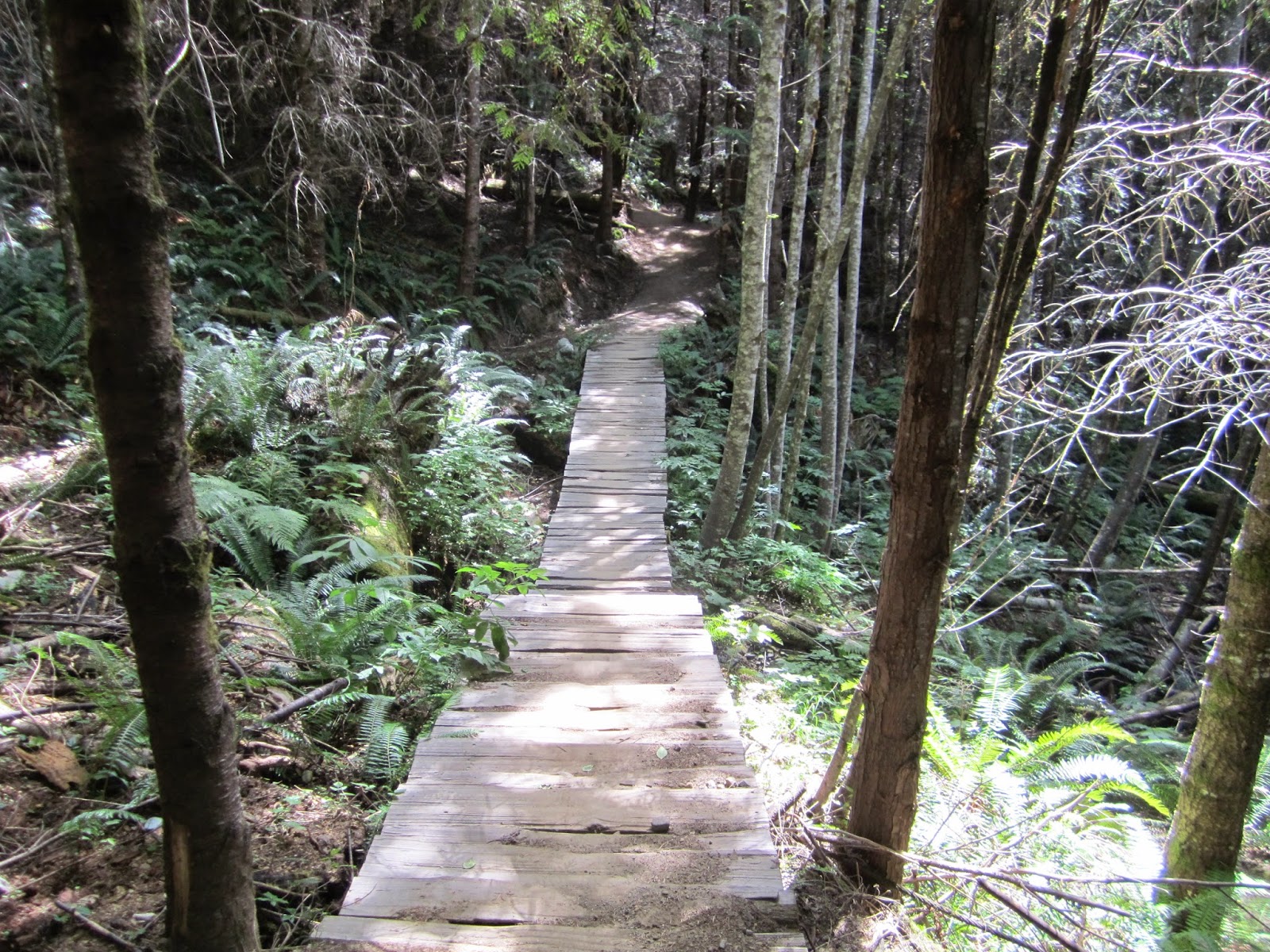 I rode three laps.  I could have stayed all day.  The trail was great!  I thought it prudent to save my legs for the next two days for the bike camp at Whistler.

Some of the trails at Whistler are smooth, wide, and about any bike will do.  However, many are quite a bit more extreme.  I'd rented a full set of body armour and a full face helmet for this camp. 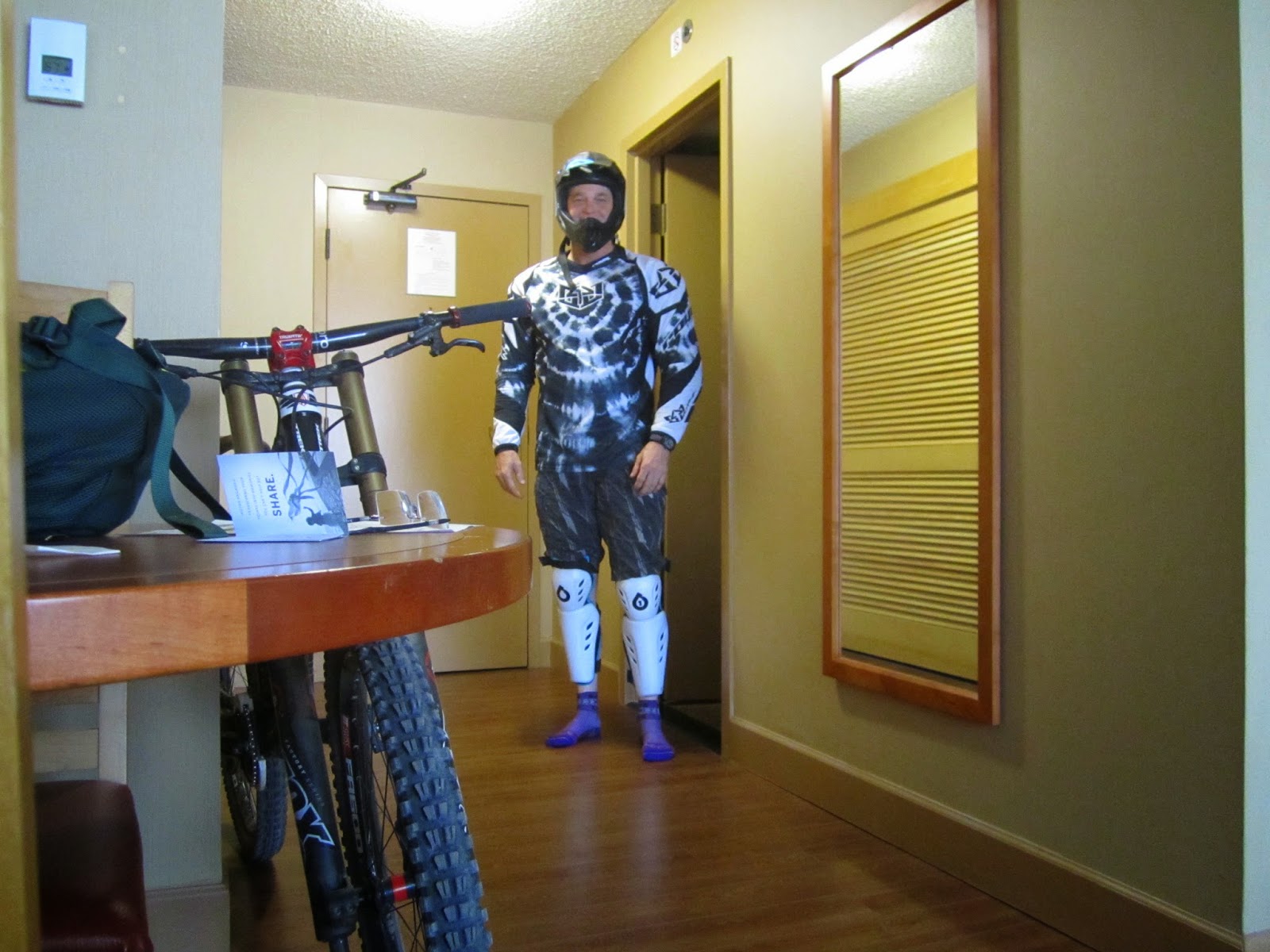 We were divided up into groups of no more than five riders based on a combination of ability and experience with bike park riding.  After a brief lesson on how to get your bike on the chair lift, we headed up.  Some of the first things we passed were the jumps and structures for Crankworx.  That was supposed to start at the end of the following week. 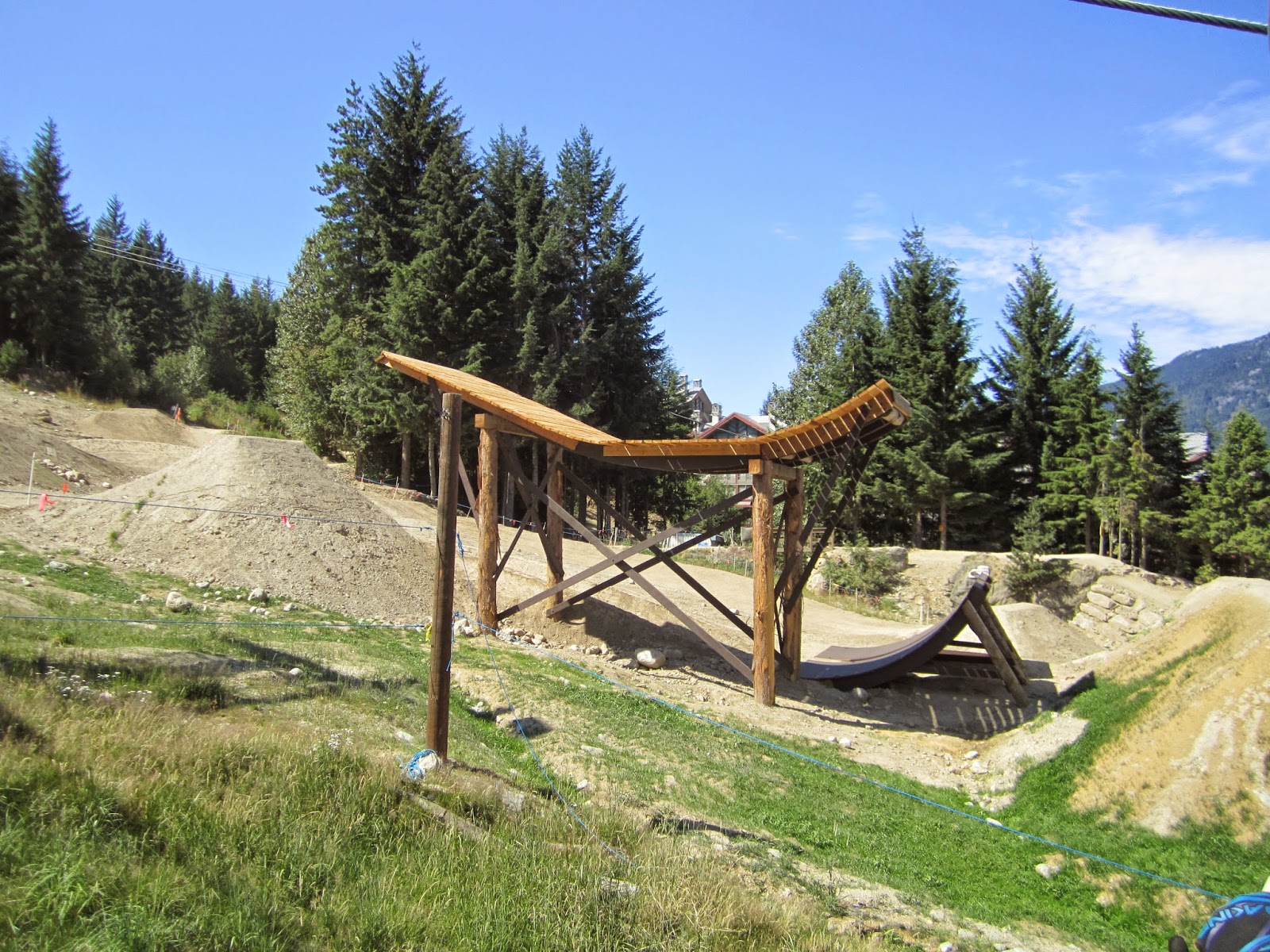 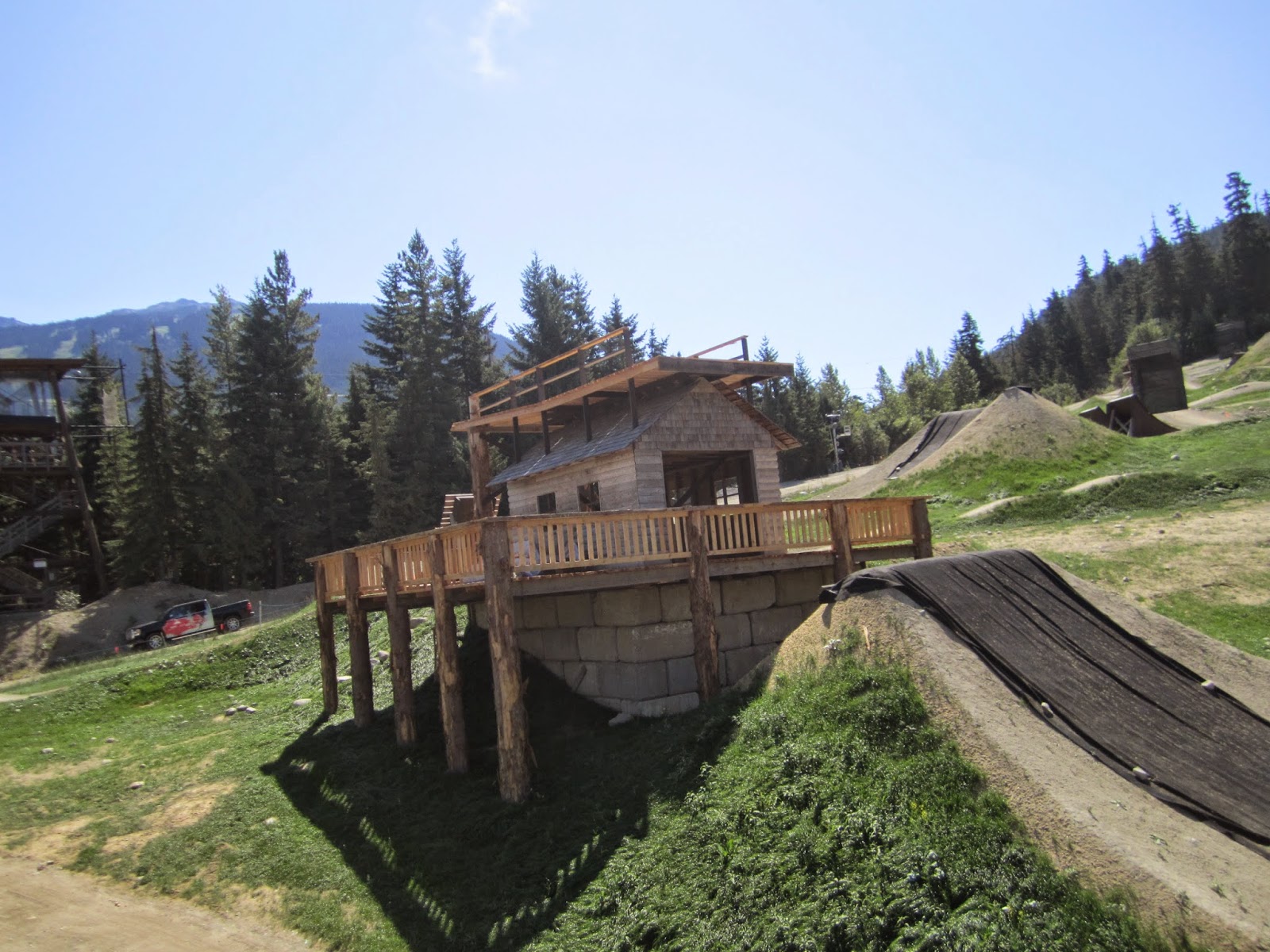 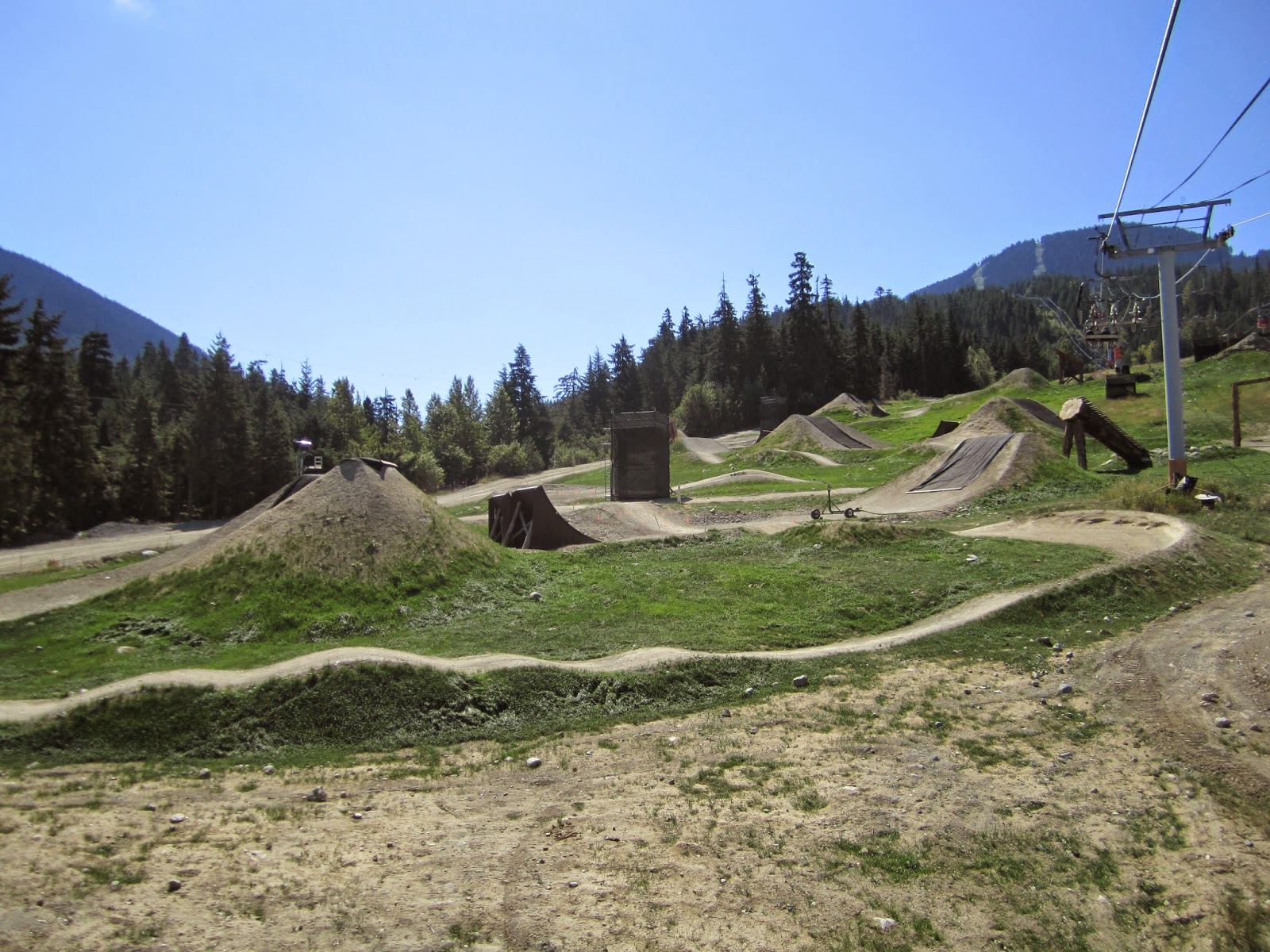 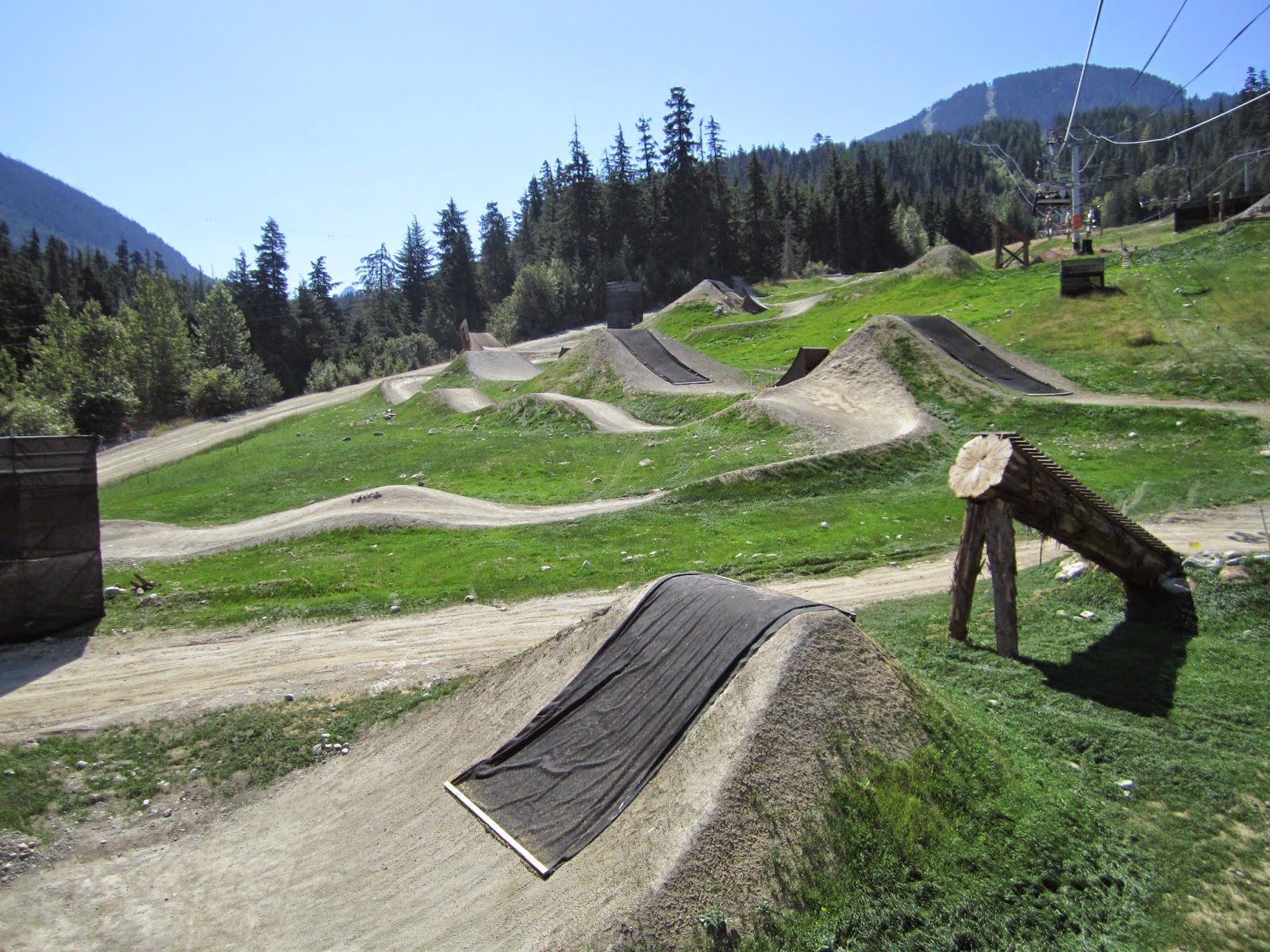 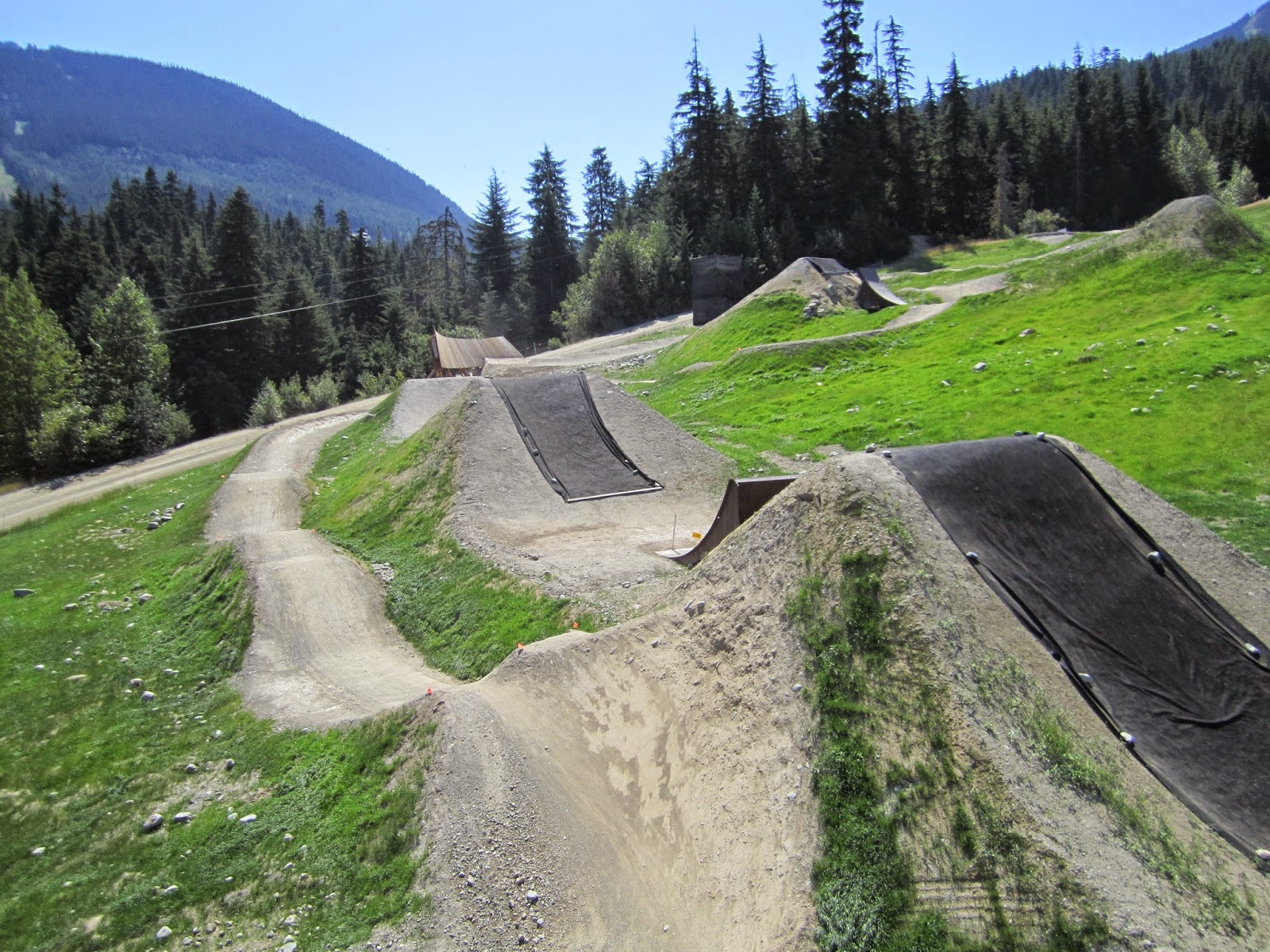 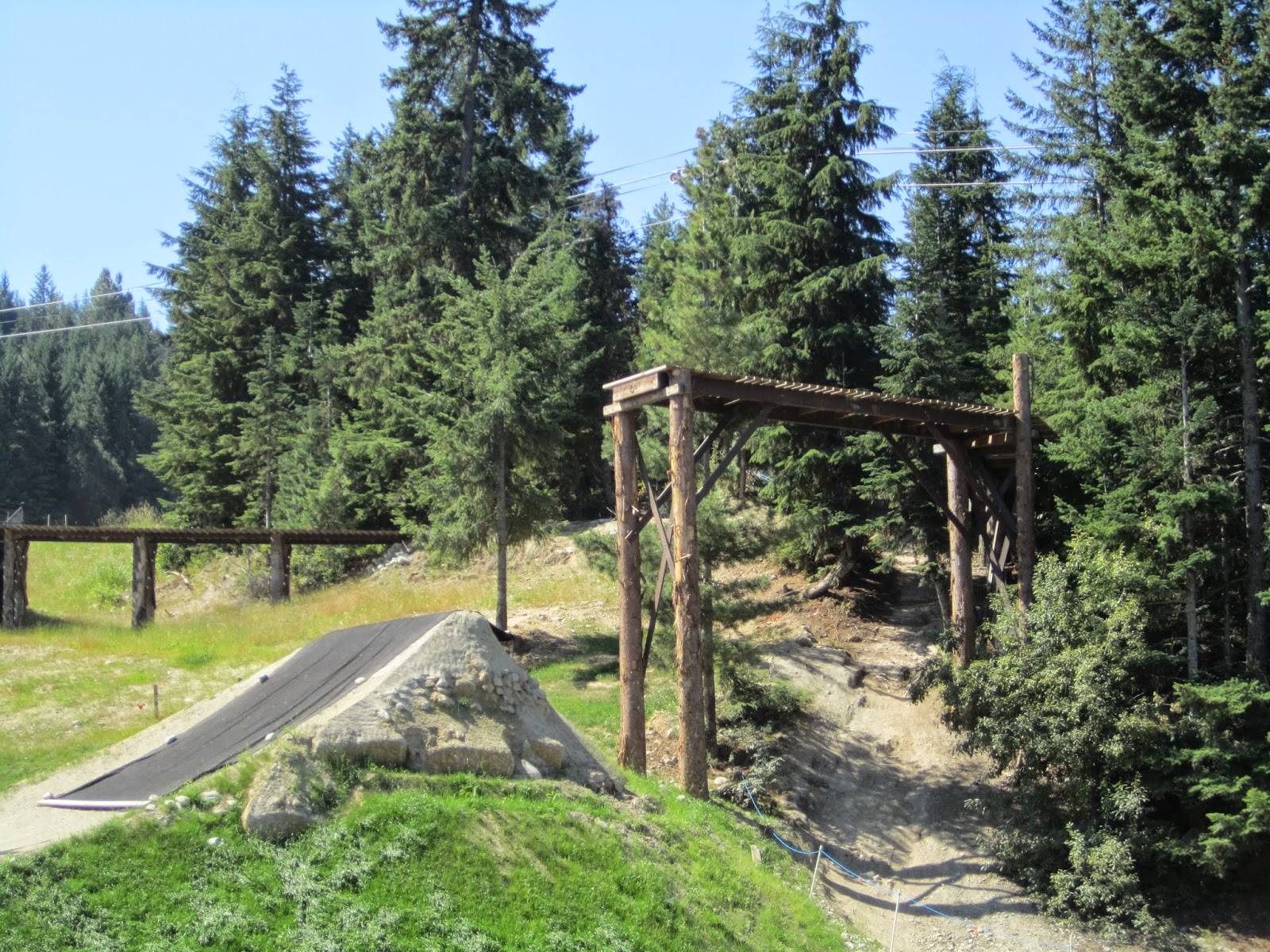 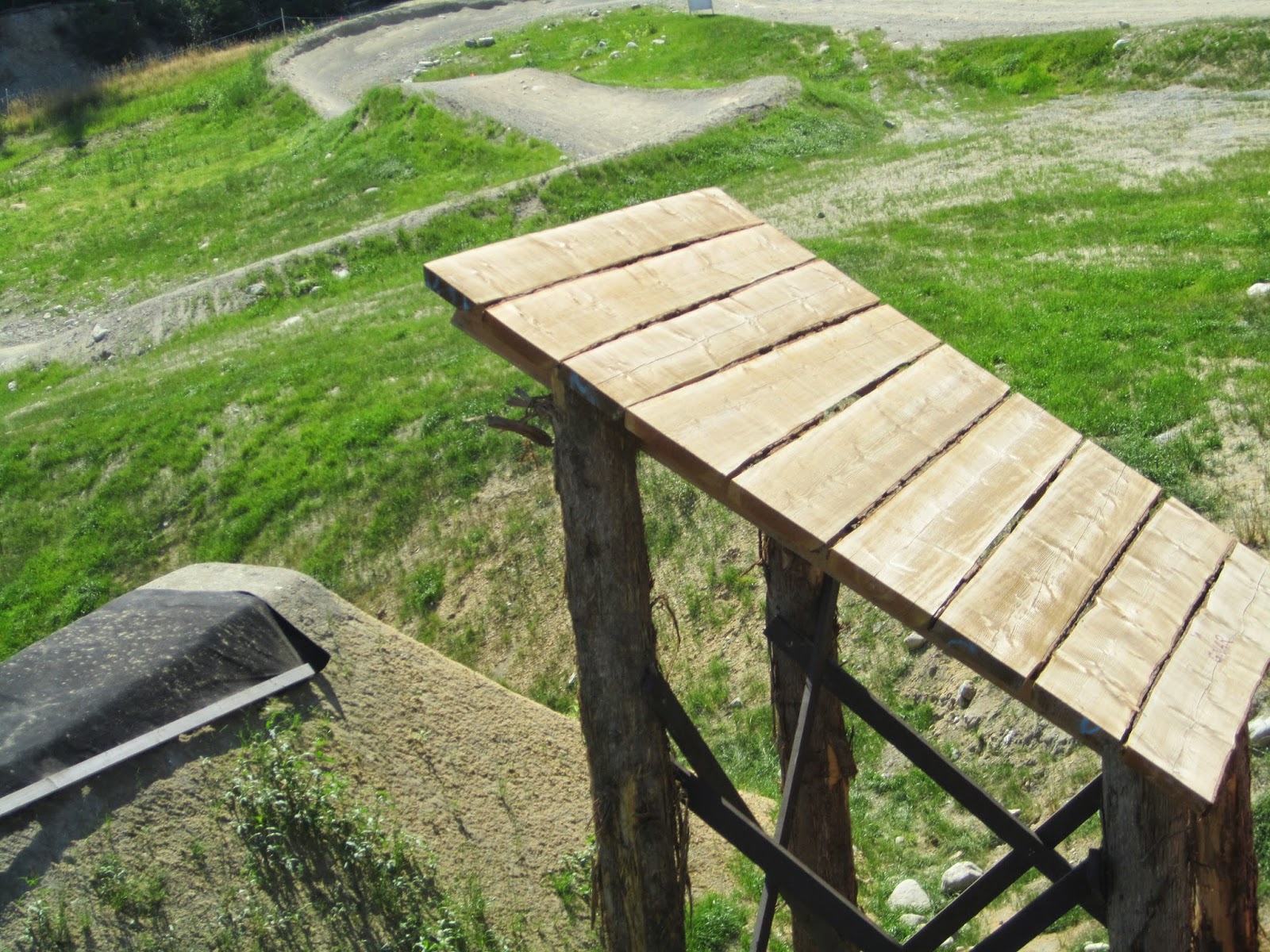 The two day camp consisted of learning to corner better, riding technical stuff, and how to execute drops properly.  The drops stuff was prep for learning to land jumps well.

The first day was a blast and very educational.  The second day we went up and came down some easier stuff to get warmed up and allow everyone to remember what they'd learned the previous day.  We were bombing down a trail where we were to roll off a wood drop followed closely by a table-top jump.  For pretty much all the camp I was right behind the instructor and others fell into line based on ability and speed.  I cleaned the drop and jump.  I heard the rider behind me land the drop and then the hard crash at the jump.  He hit very hard and went over the bars.  He hit hard enough he wasn't sure how old he was and asked several times if he landed where we moved him.  Concussion.  He was done.  His girlfriend was then done, too, as she was going with him for medical treatment.  Five students became three.

We finished the run and head back up again.  We rode down a bit and then the instructor told the two other dudes to take this very easy trail down and around and to meet him and me at "the sign."  "The sign" being an actual sign we'd stopped at many times before.  The instructor took me down a very technical, double black diamond, trail.

Before we took off, he explained the trail.  His explanation included how to negotiate a particular section.  He told me there was a tree root of about four inches in diameter that curled from right to left.  He said it best to ride the root with the front wheel as it pointed to bike in the proper direction for the next section.  The root cantilevered out over the three foot vertical drop we need to ride down.

He said, "Ready?" and I said "Yep!" and we were off.  It is truly amazing how these slack head tube angle bikes roll very gnarly sections with bg drops.  If I were to try this on either of the two mountain bikes I own, this would probably be a hike-a-bike section.  We made it half way down with no problems and came to the curved root section.  The instructor headed down, got his wheel in the wrong position at the drop, the front tire washed out and he was down.  Meanwhile, I've got the front wheel on the root as I was told and was doing fine.  He crashed, I looked at him, my front wheel washed out, and I was down.  The body armour did its job.  I knobbed my knee a bit but knobbed my left hip more.  I got up, dusted off, and we rode the rest of the way down this trail.  That's when the call came over the radio.  One of the two other dudes in my group crashed hard and had to be hauled off the mountain.  Now there was me and the dude who'd only taken up mountain biking the previous week.

It was lunch break by then.  We split up, had lunch, and then reconvened for the finale ride.  The last ride of the entire trip was taking the gondola up 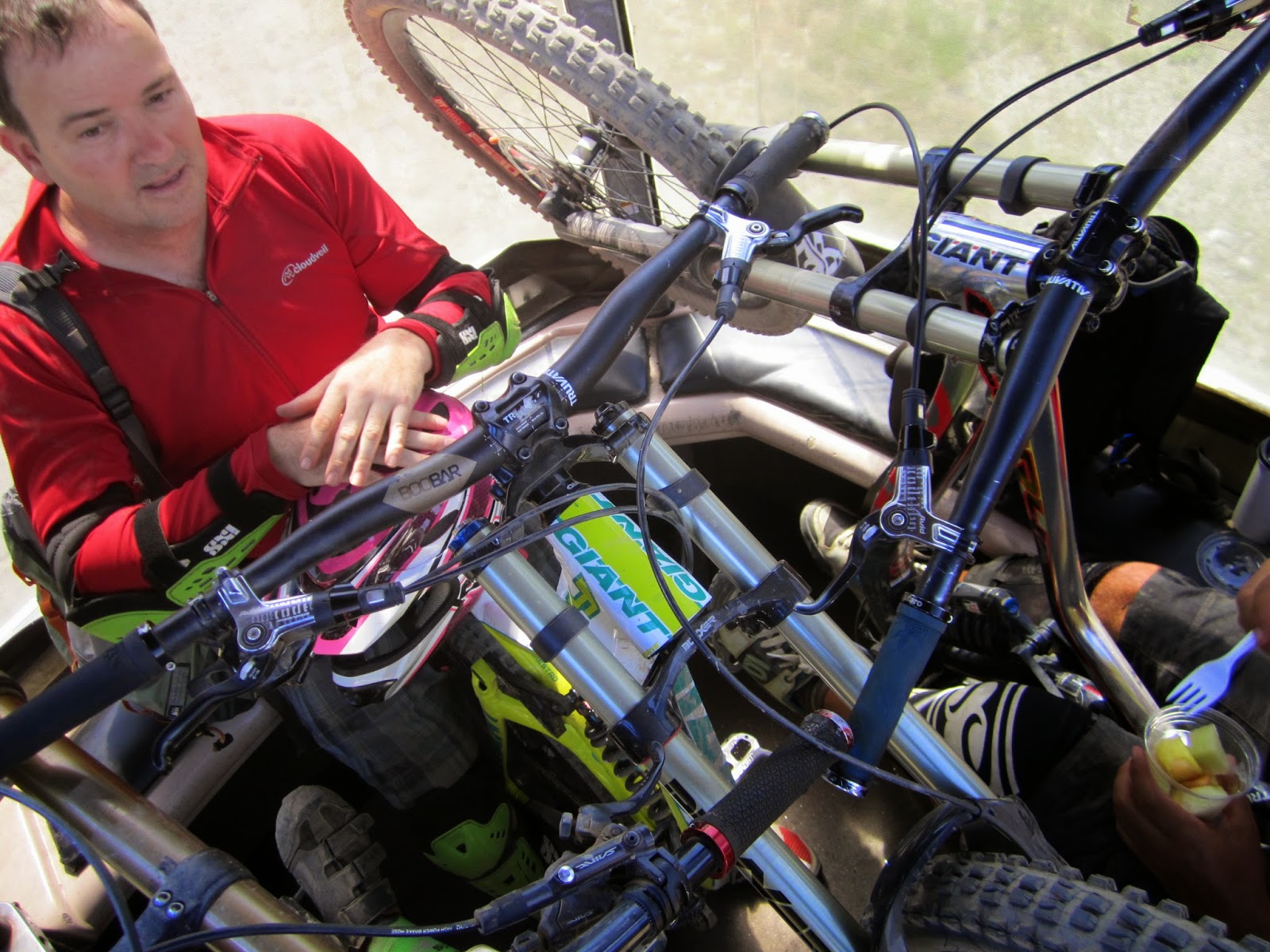 as far as it would go.  From there it was a short ride to the chair lift to take us to the very top of Whistler. 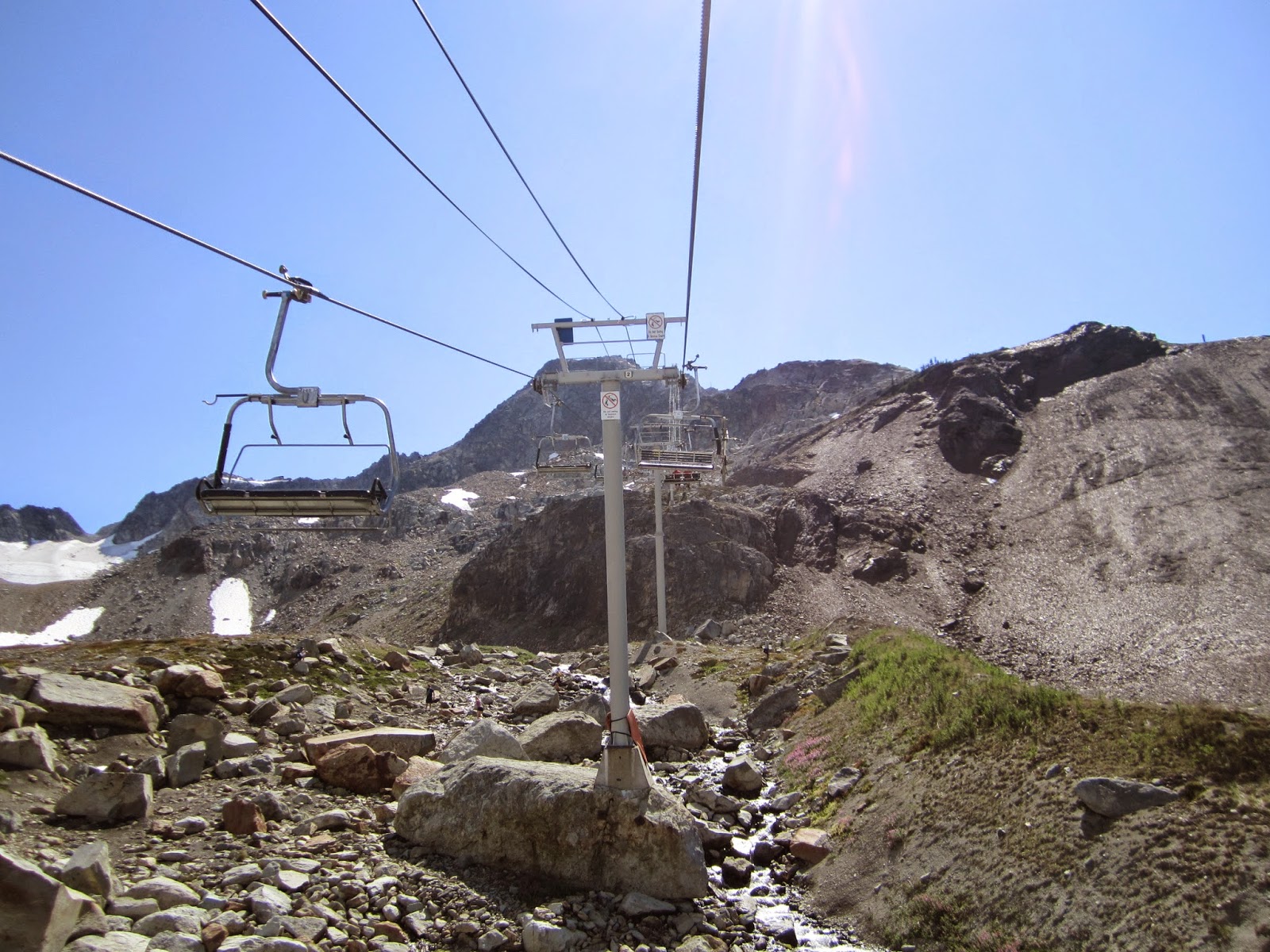 The ride from the very top all the way to the bottom is called Top of the World.  It starts with some double black diamond sections, goes to black diamond sections, and has over 5000 vertical feet of descent.  Since I was the orphan, I was thrown into the next higher ability group.  I was very pleased to be riding at the very front of that pack my the third section of this ride.  I was having a blast and riding as hard as I could for the end of three days of hard riding.

I do have some very bad news.  I'm going to have to buy an eight-inch travel bike.  Riding at Whistler is so amazing that I'll be back several times.  Oh, the whole set of pictures is HERE.
Posted by Snakebite at 10:11 AM No comments:

I'm still working on the full-blown Whistler mountain biking recap.  But in the mean time, learn something very important. 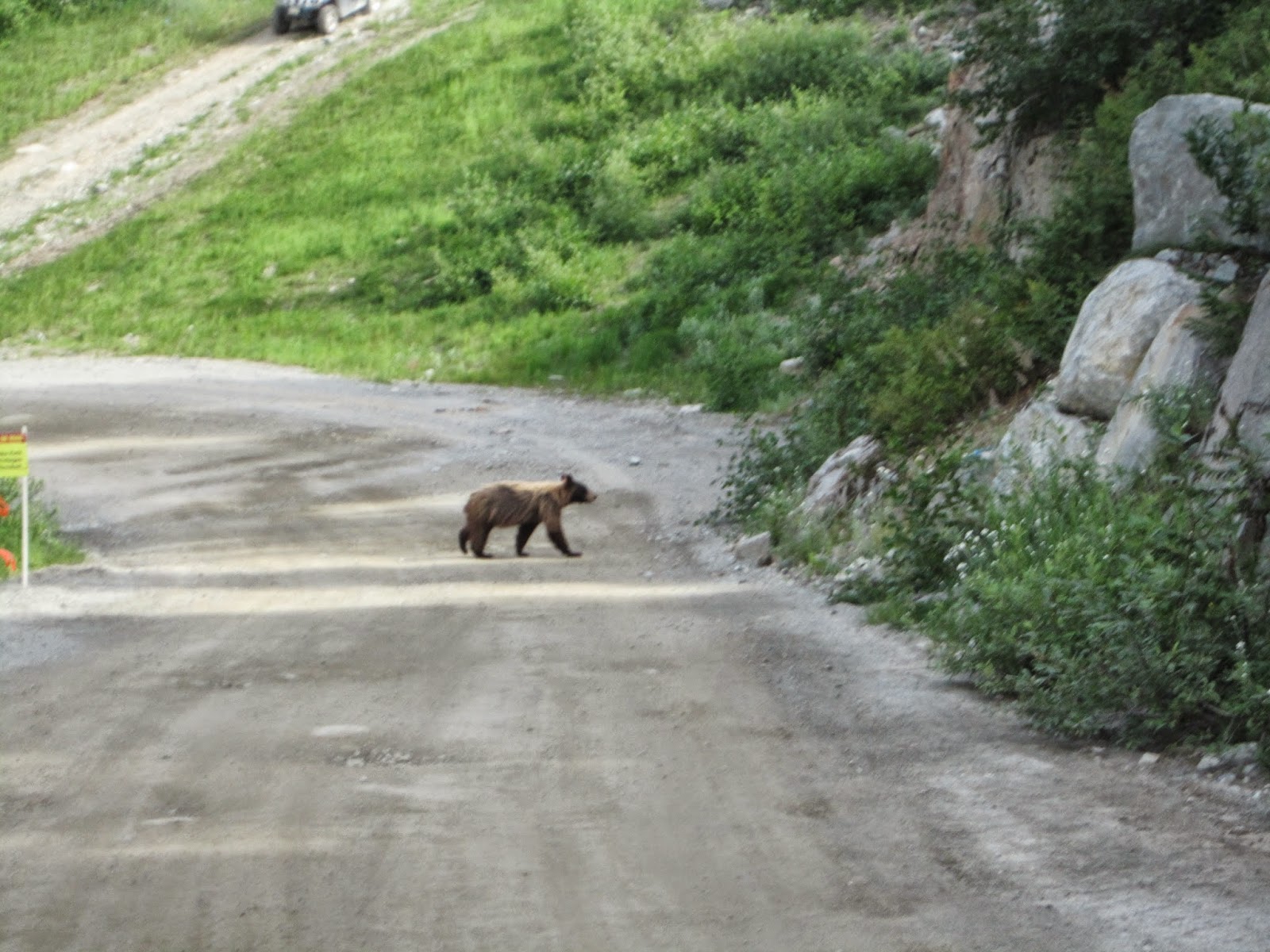 Posted by Snakebite at 7:33 PM No comments: