I'm getting pumped about the move / relocation. For now the days are dragging on in anticipation of packing, loading, and moving. The outdoor recreational prospects practically have me giddy. 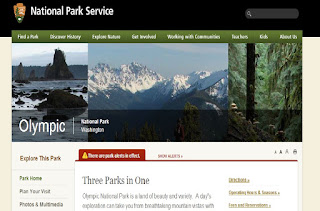 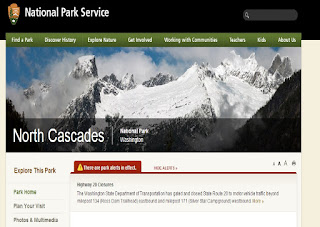 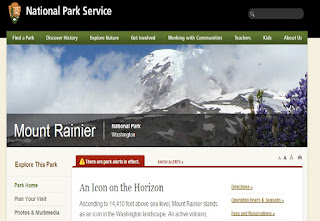 and the Pacific Crest Trail 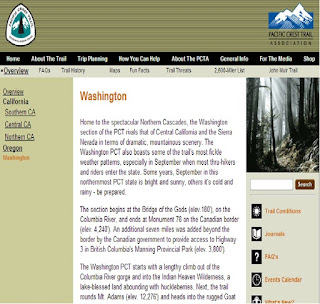 within a few hours, I have to say I'll be in my element.

There were a handful of reasons I've decided to relocate, having MANY outdoor recreational opportunities was one.  There will be no arm twisting required if you come to visit and want to go to any/all of these.
Posted by Snakebite at 4:15 AM No comments:

Saturday evening I joined the local bike club's winter meeting.  It was nice to catch up with some rollers I'd not seen in a while.  Part of the evening's agenda was a brief visit from one of our U.S. Congressional delegation.

Part of his spiel was to talk about the last transportation bill.  In it includes money for bike friendly infrastructure.  What struck me was the fairly substantial time he spent discussing how the US Congress is not as partisan as it seems.

At the end he opened it up for questions.  There were none.  I guess is the group was too polite to get after him for the bickering going on in Washington D.C. and his comments on how congress is not partisan is pure bullshit.

The after-party was a visit to Monk's House of Ale Repute.  I way over indulged and was fortunate to catch a ride home.  Shortly after arriving I passed out.

It's a pretty rare instance I get that into the fruit of the barley.  Sunday was spent sleeping in and pretty much doing nothing constructive.  Today I'll get into something resembling training.  I've slacked off this winter and I need to get my ass whipped into shape.
Posted by Snakebite at 4:10 AM No comments:

I may, or may not, have a dilemma. I've ten bikes to transport when I get into the move proper. In addition, I've got all my other crap. Furniture, clothes, pots, pans, dishes, books, and gear. Lots of gear.

When I look around, mostly I don't have that much stuff. Except for the bikes. They do take up a lot of space. Hence my dilemma – how am I going to fit all my crap into the moving truck? Contrary to some's wishes, I'm not leaving any bikes behind.

I've put my engineering mind to work I believe I've a viable scheme to fit everything in the truck. Before I get into that, perhaps I should do a run-down on the bikes at hand.

In no particular order:

Surly Big Dummy – this is my cargo/grocery getter bike.

Surly Cross Check – I've built this up as my single speed commuter. It sports fenders and a rear rack.

Schwinn Suburban (x2) – circa 1971. I picked up a “his” and “hers” for cheap at a consignment place. They are rideable now, but, I'll be doing some clean-up and putting new tires and some other stuff on them.

Surly Long Haul Trucker – my touring rig. It has racks for and aft. Comfort defined.

Raleigh Team Raleigh – this I bought frame only, had sand-blasted, powder coated, and built up as a fixie. The frame is circa 1977.

Surly Moonlander – My fatbike. I orgininally got this thinking I'd be doing the Arrowhead 135. Maybe I still will – just not this year.

I've decided to go low tech. I'm going to place a 2 x 4 chuck of wood across the interior of the truck. I can put it up high enough such that I can bungee cord the handle bars of each bike to the board and have the rear wheel sit on the truck bed. This should work for all the bikes except the Big Dummy. Since it is as long as a tandem, it will need special packing.

Anyway, that's the game plan. We'll see what the reality reveals. I'll take pictures of the load and how this will come together. I'll post the pictures on here. I think this should work pretty well. Time will tell.
Posted by Snakebite at 3:45 AM 2 comments:

As previously advertised, here are a few pictures from my trip to the Pacific Northwest.  Clicking on a picture should make it bigger.

A few from the I-5 Colonnade: 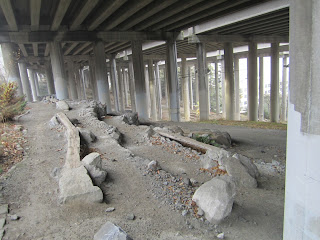 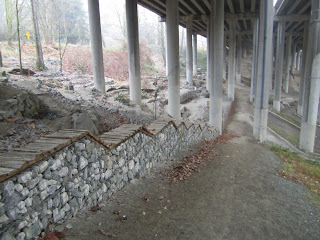 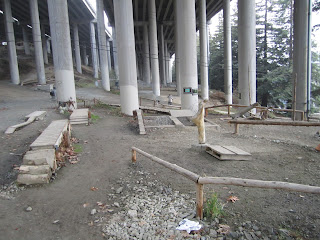 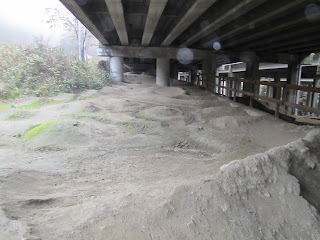 Here's a map of the complex that I gathered from the Evergreen Mountain Bike Alliance (which I'll be joining) web site..... 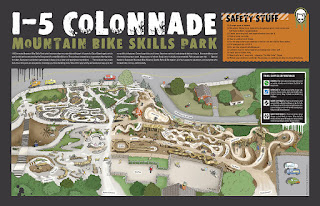 I'll be doing some shopping here 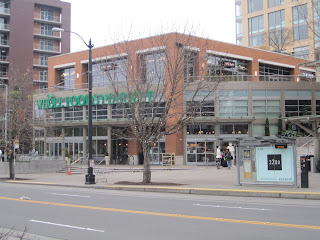 The Space Needle in the fog 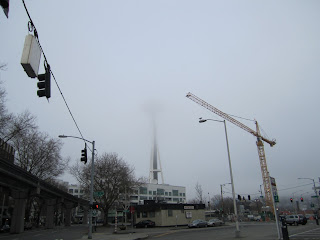 The Space Needle less in the fog 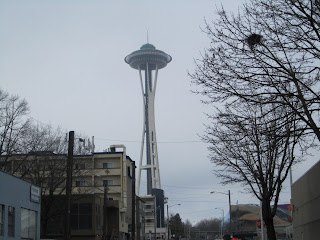 And, of course, the Public Market 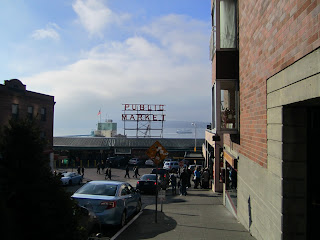 If you want to see all the pictures, just go HERE.
Posted by Snakebite at 3:57 AM No comments:

Every once in a while a dude stumbles upon a really, really cool movie.  Check out this short video.


CASCADA from NRS Films on Vimeo.


Wasn't that cool?!?  It reminds me of something a dude might see at, say, the Banff Mountain Film Festival or the like.

I'm still getting the guts to do gap jumps on a mountain bike.  I'll get that down before I attempt to go over the falls in a 'yak like these dudes did.  Holy crap!

Oh, the Banff Mountain Film Festival?  Maybe watch a little of this.....


Posted by Snakebite at 4:26 AM No comments:

I've made it back from the Pacific Northwest.  My mission was to secure living arrangements.  I'm happy to report I've accomplished my mission.

In fact, I was done early enough to see a bit of the area.  In my next post I'll report what I saw.  By that time I'll have the pictures downloaded from the camera, sorted, and ready to share.

In my absence, apparently is snowed and it got fricking cold.  Like below zero cold.  I'll not miss this part of living in the Midwest.
Posted by Snakebite at 4:25 AM 1 comment:

I’ve an early afternoon flight for the .  The mission is to find and procure a place to live.  I’ve done a lot of online research.  Now it’s time to check the places in person.

I’ve a mix of appointments set up for Saturday.  I’ll be visiting several apartment complexes and a few single-family homes.  The goal is to find a suitable place at a reasonable price with the amenities I want in a desirable location.  My guess is the place I get will have some sort of compromise among all that criteria.

If I can sign on a dotted line sooner rather than later, I’ll have some time to explore a bit.  I’ll be sans bike, but, I’d like to locate some singletrack and/or trailheads.  I’ll have my disc golf discs with.  Perhaps I’ll give a course or two a go.

I’m back quite late on Sunday.  I hope to have several pictures to share.  The forecast for here is fricking cold for Sunday night.  I’ll not miss the extremes in temperature.
Posted by Snakebite at 6:34 AM No comments:

I’ve started this thing to document my new life in the .  This is sort of a medium for family and friends, and other interested parties, so they/you can keep up with my goings on.

In the very near term posts will centered on the mundane.  Stuff like finding a place to live – which I’ll be beginning this coming weekend – packing, moving, unpacking, etc.

However, once that is done I’ll present my getting to know the new area on here.  There will be three National Parks within a couple hours drive, a of singletrack to be explored, the Pacific Crest Trail is only a two hour drive away.  And, being in such close proximity to much water, there will be kayaking and fishing exploits.  I’ll even throw in various camping excursions to non National Parks in the area.

I’ll be taking ten (yes, you read that correctly) bikes with me and all my miscellaneous gear.  I’ve camping gear, climbing gear, backpacking gear, bikepacking gear, and probably some gear I can’t remember.  I’m looking forward to getting reacquainted with the lot soon.

Back to finding a place to live – I’m intentionally going a bit big.  I want to make sure there’s plenty of room for family and friends to come and visit and stay without the burden of needing to pay for a hotel room.  So, if you need to get out of town, would like to visit, and need a place to stay, let me know.  My place will likely be available.
Posted by Snakebite at 3:30 PM 4 comments: