Sunday some the tribe and I met in North Bend, WA at the North Bend Bar and Grill.  The game plan was to chow down and then attend a movie.  Here's what we saw:

In this part of Washington, we're entering "monsoon" season.  The upside - it was a fun movie to see.  The downside - it made us want to go climbing.  Like now go climbing.  Crap.
Posted by Snakebite at 3:29 AM No comments:

It's been a while since I've updated, new posted, anything here.  It's not that I've not been doing anything, it's pretty much because I'm lazy, I guess.

The reality is I really haven't been doing that much in the way of exciting.  I did do a ride on the John Wayne Pioneer / Iron Horse trail.  A rails-to-trails trail so no tech and gradual grades. 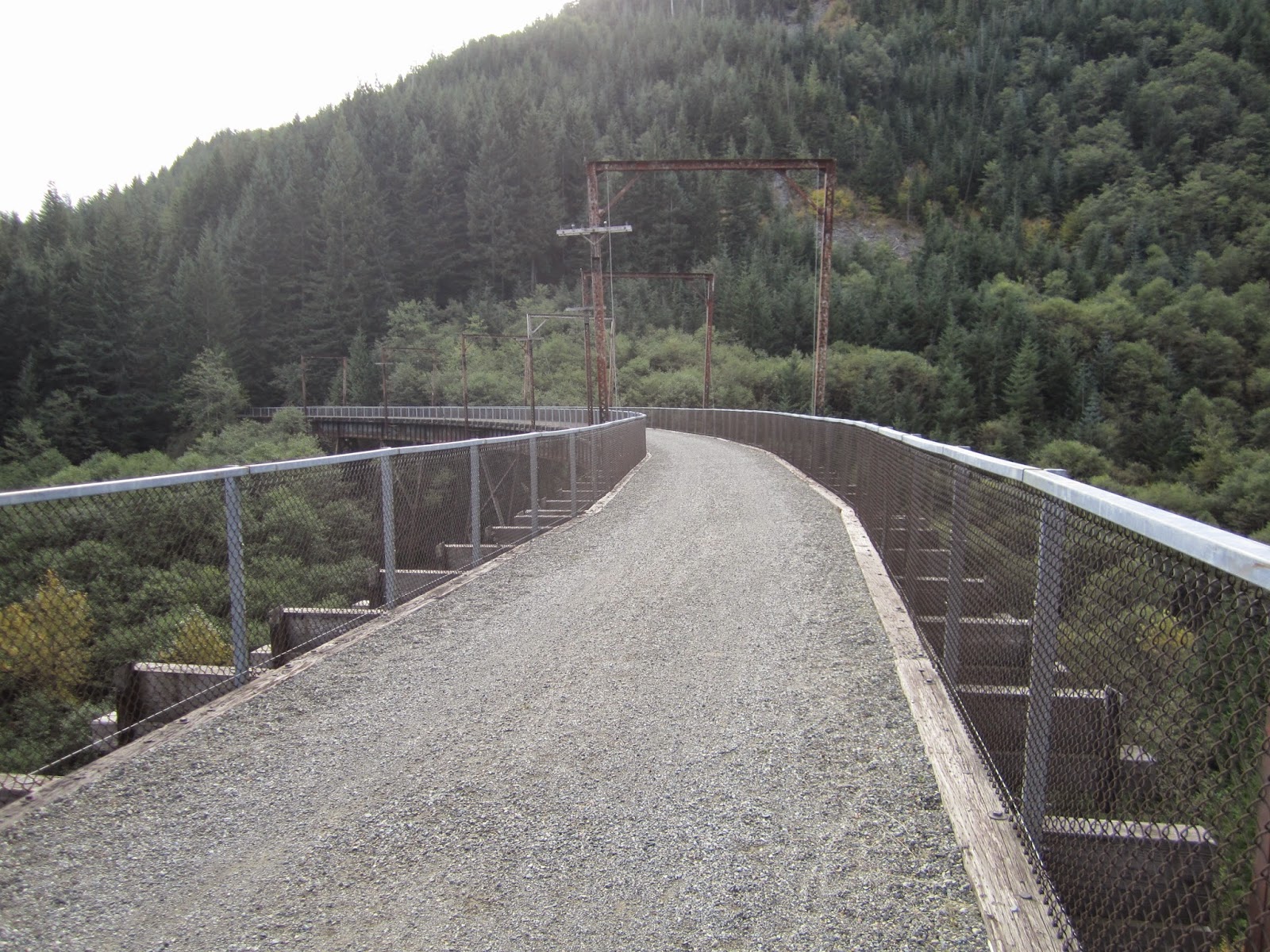 Though there were some pretty dangerous areas - not.  There was zero snow and the risk of avalanche and/or rock slides was pretty minimal - as in none. 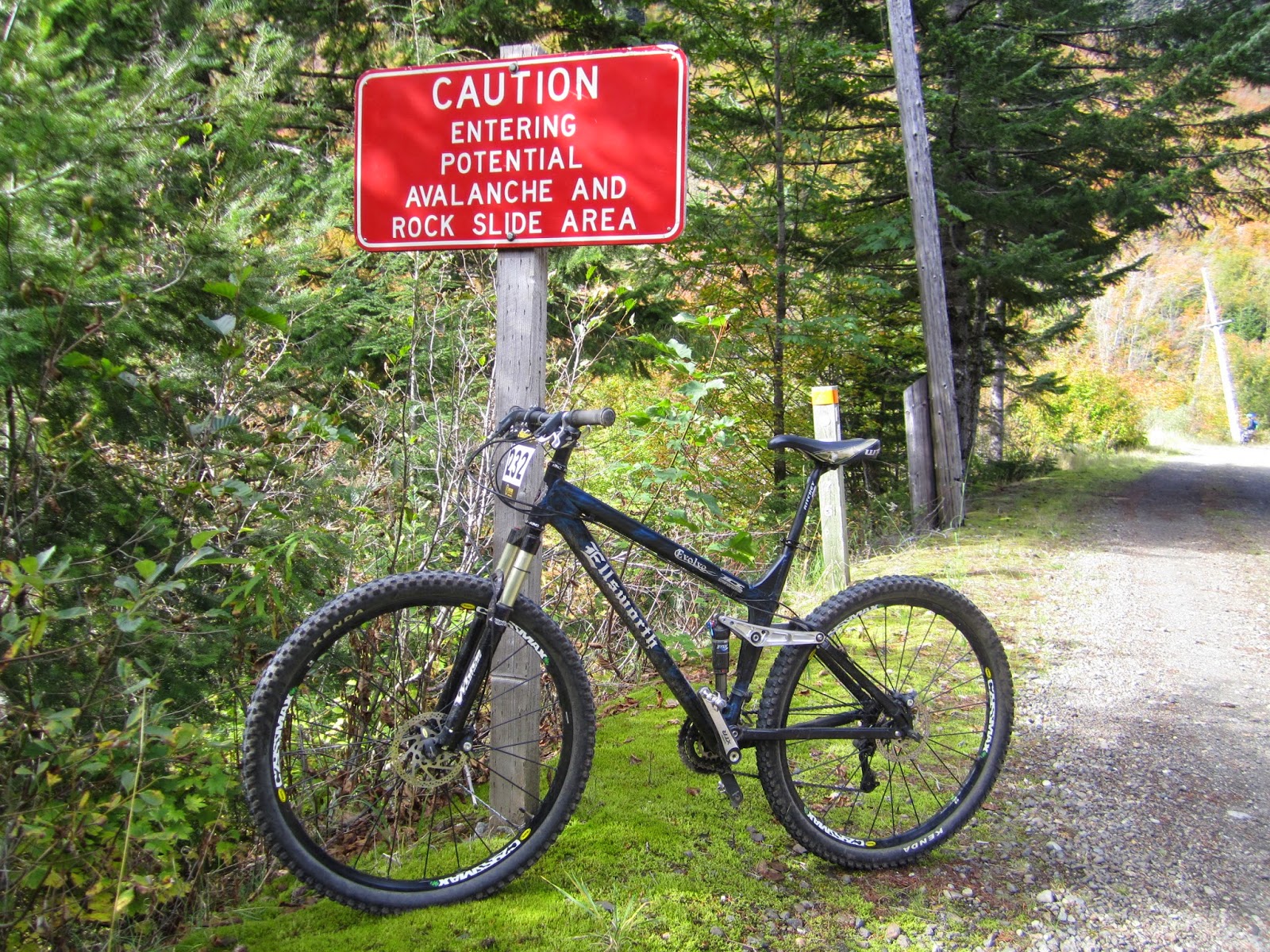 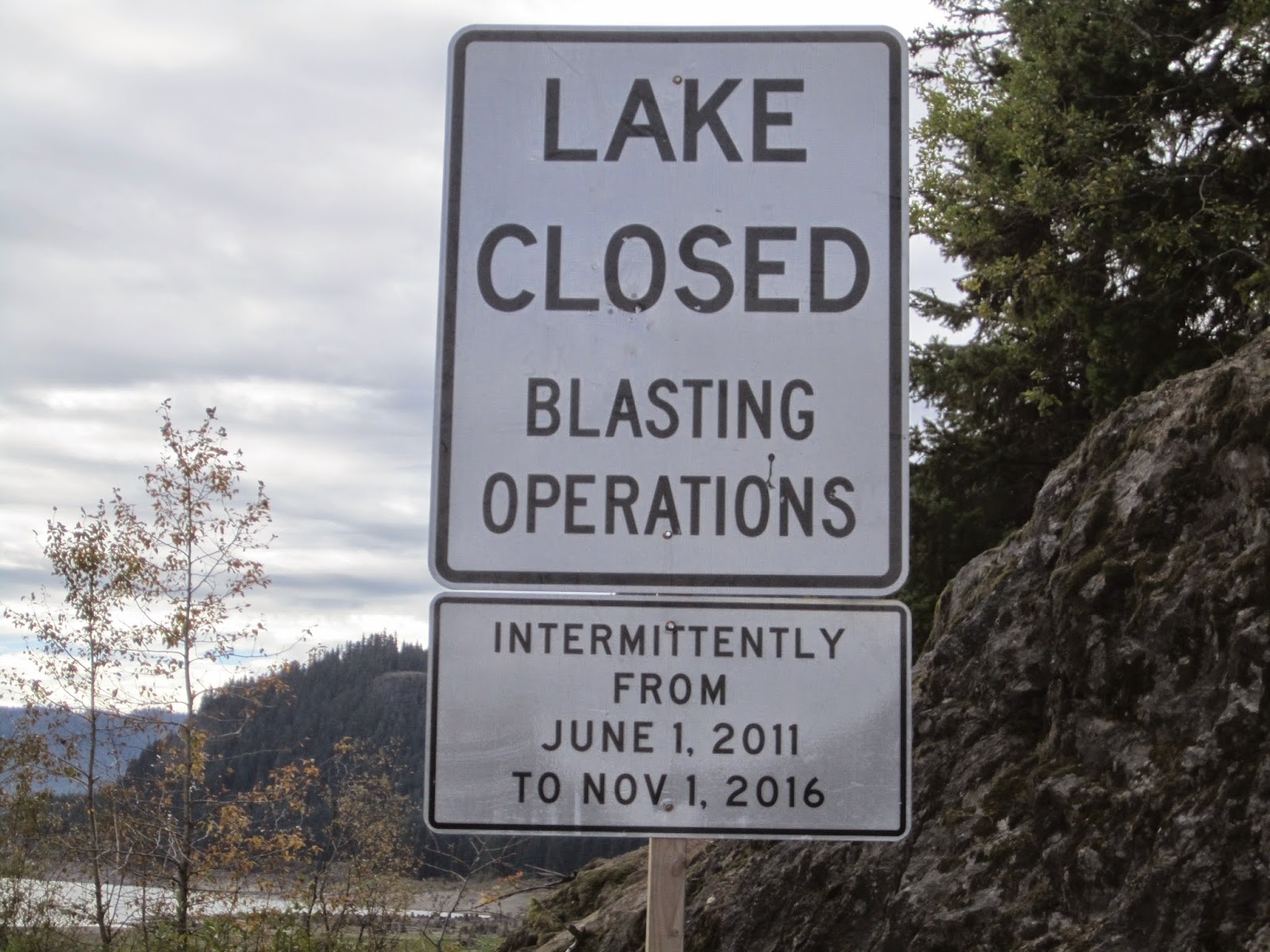 There was no blasting.  Just 5/8 of the lake sort of gone.  Judging from a ride to this lake last year, my guess is the level was down about 30 feet.  I expect this is the case each and every late summer. 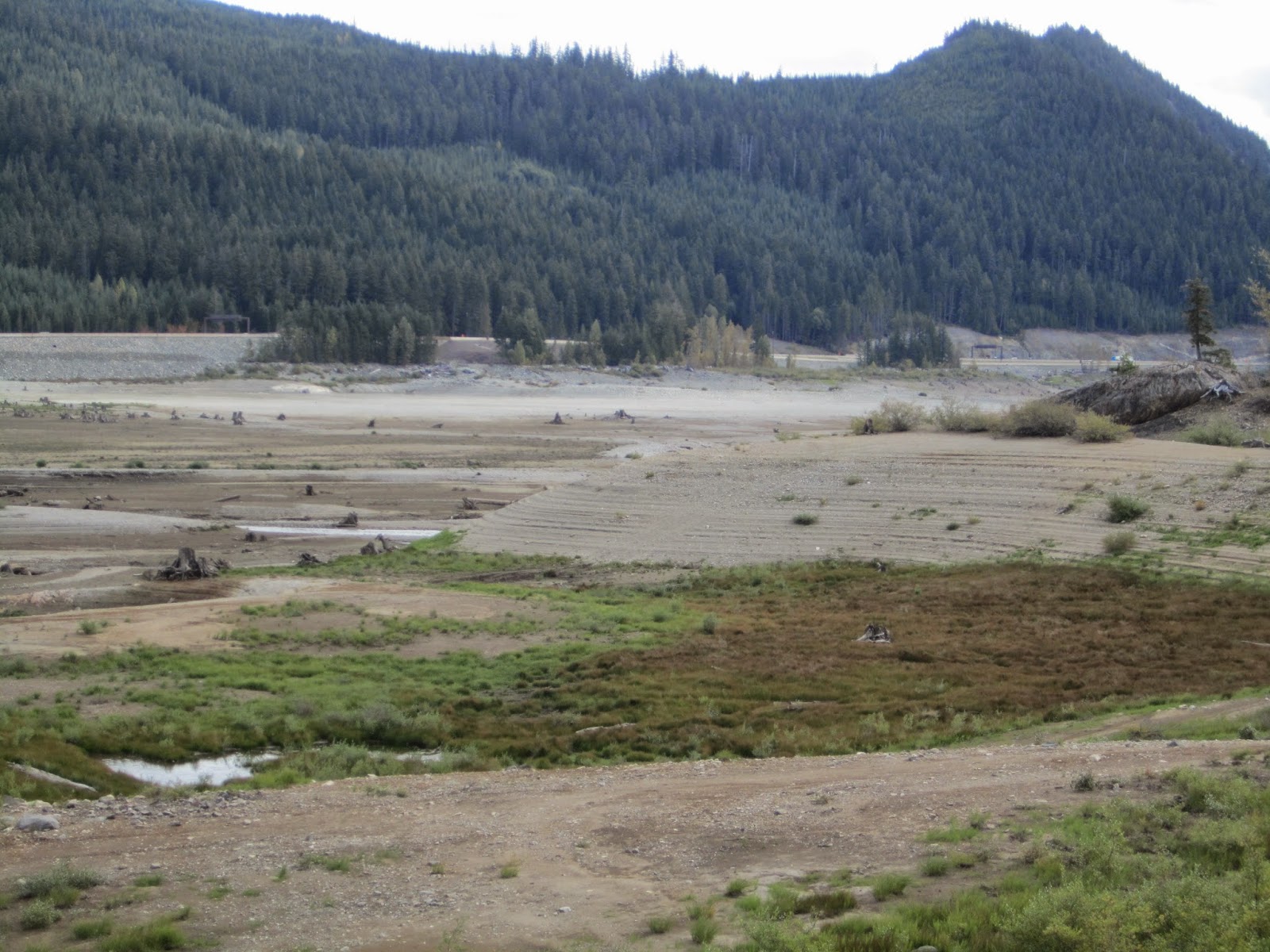 For example, these rock cairns will be under water come spring. 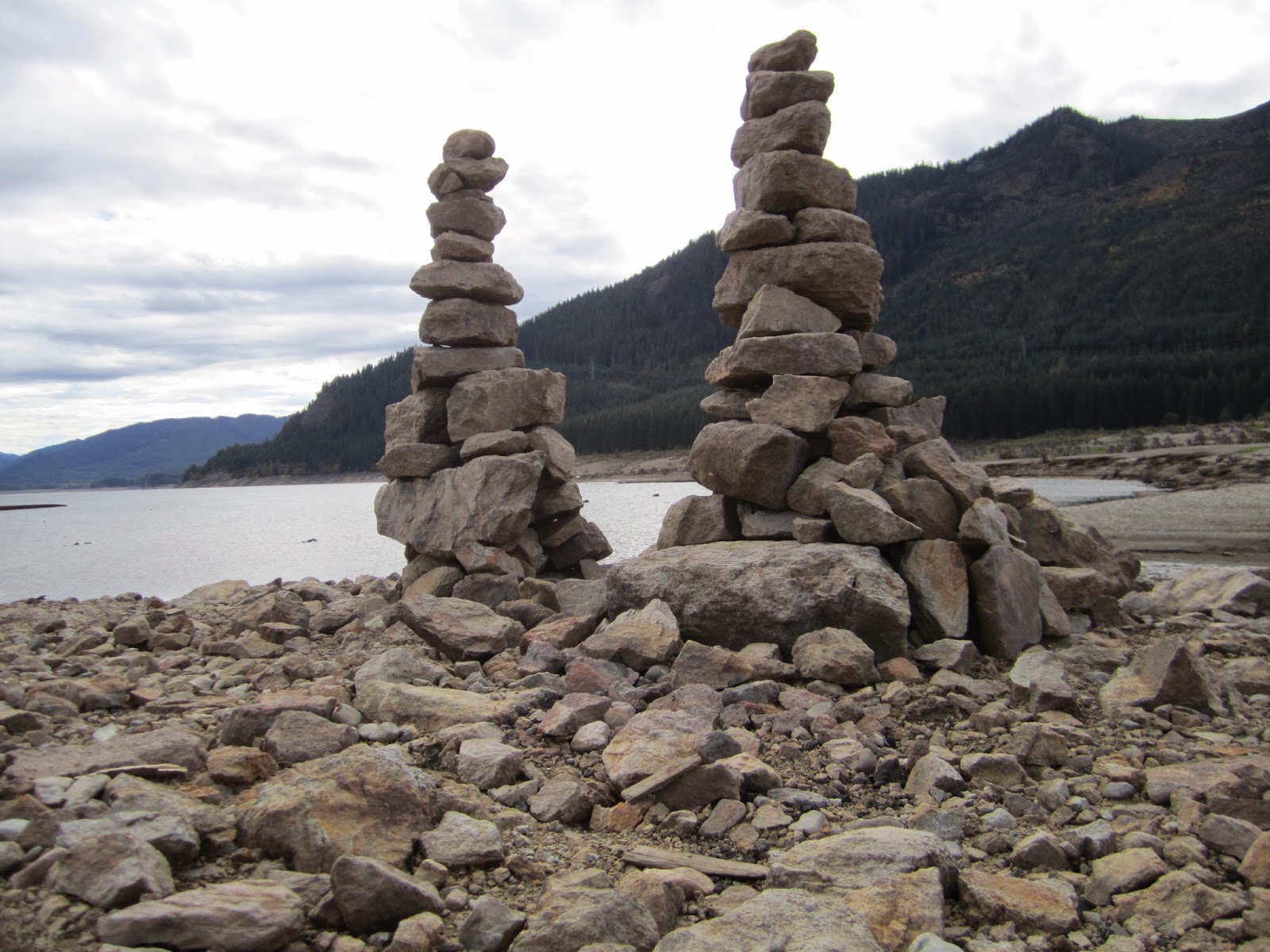 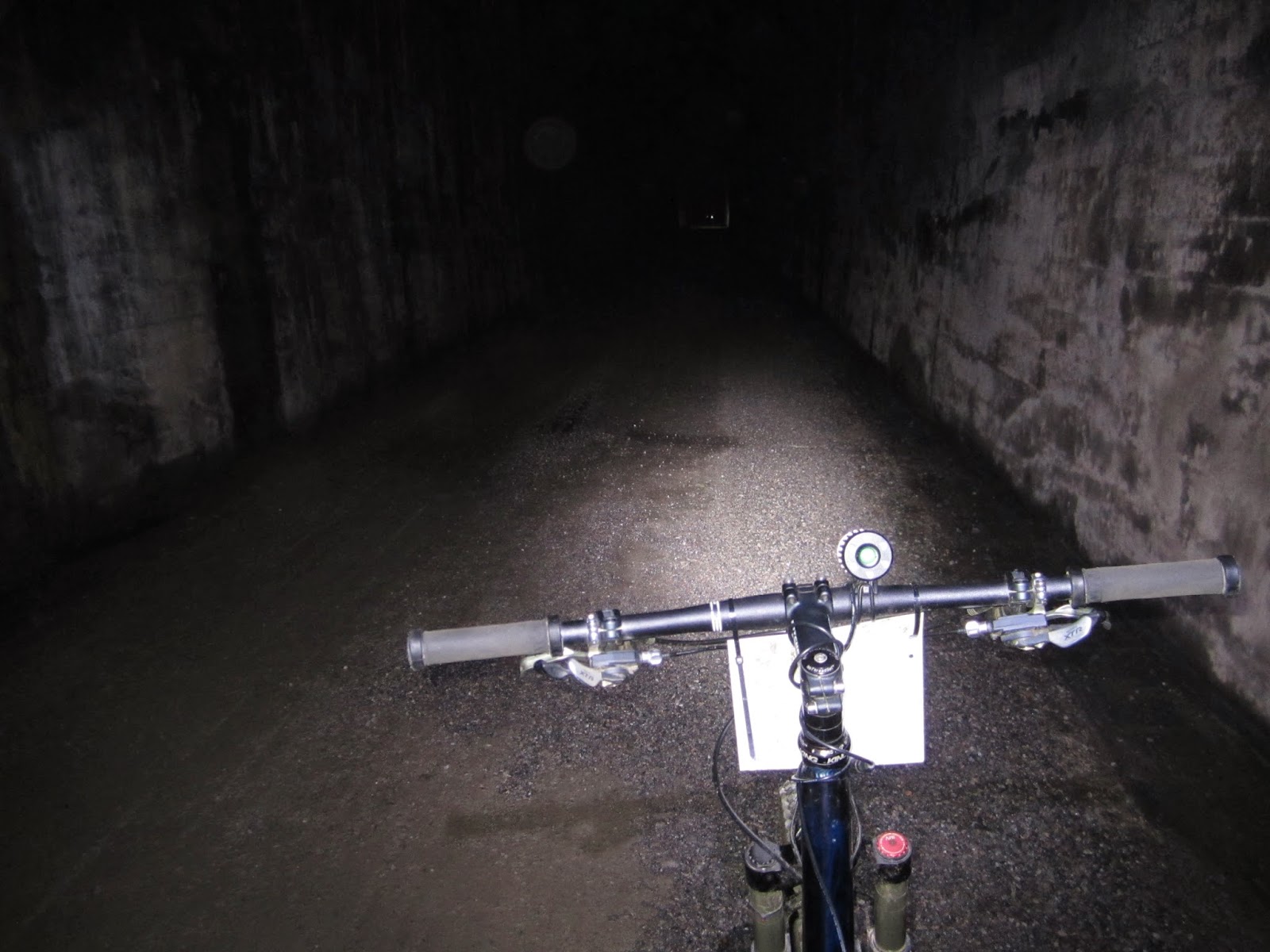 A couple of weekends ago some of the usual tribe and I headed in the direction of Leavenworth, WA for some mountain biking and Octoberfest attending.  Since Tiger Mountain was on the way, we had our mountain bikes (obviously), we had to stop and ride Tiger.  The view from the top was its usual great. 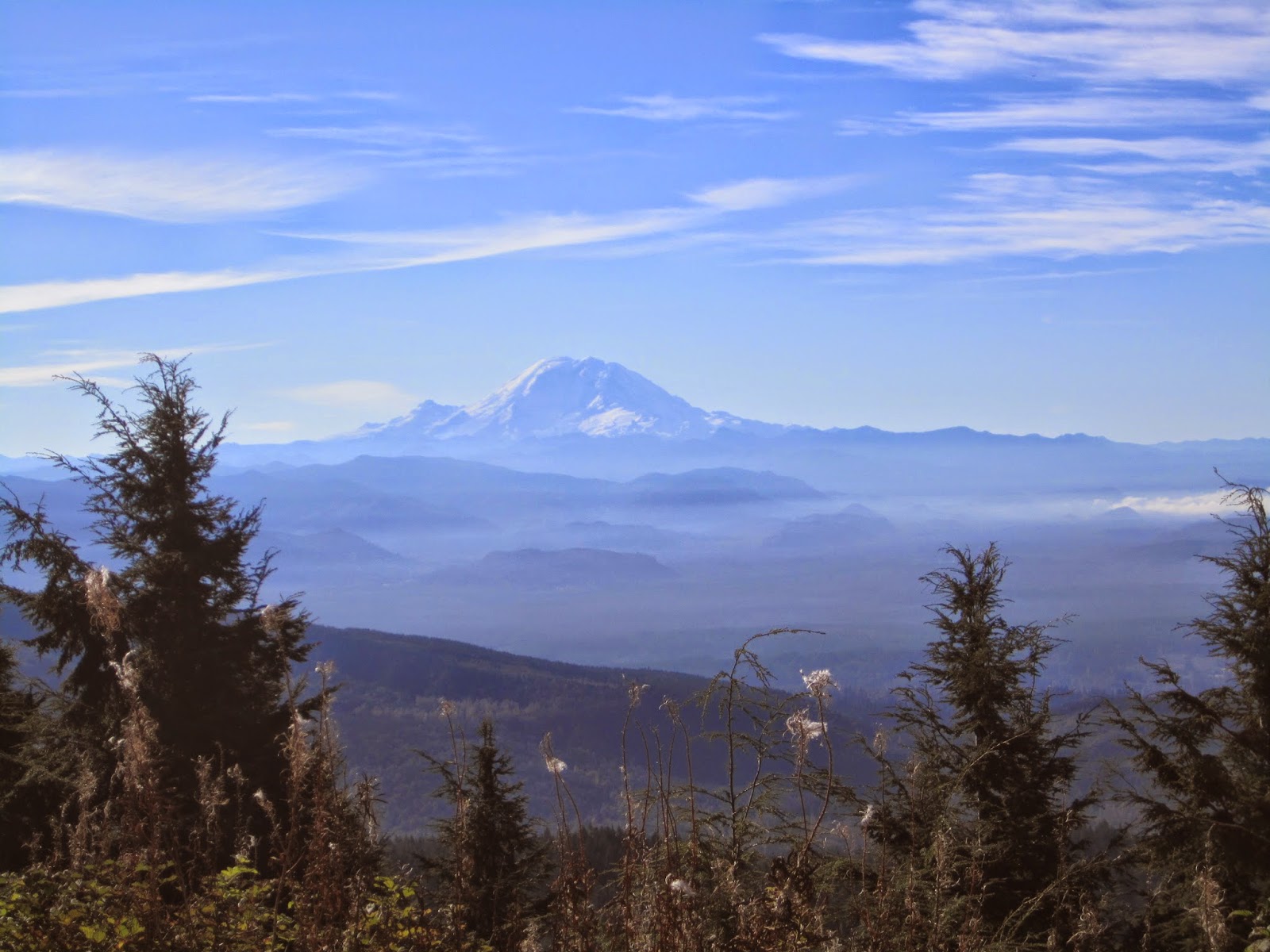 Doug, one of our group, did some research and suggest we ride a "secret" trail right outside Roslyn, WA called Rat Pack.  Per this weekend's norm, we got out of the car, on the bike, and then grunted uphill for hours.  Though the trail is secret, it is totally legit.  And, there's a giant Spam can near the trailhead (if you know where to look). 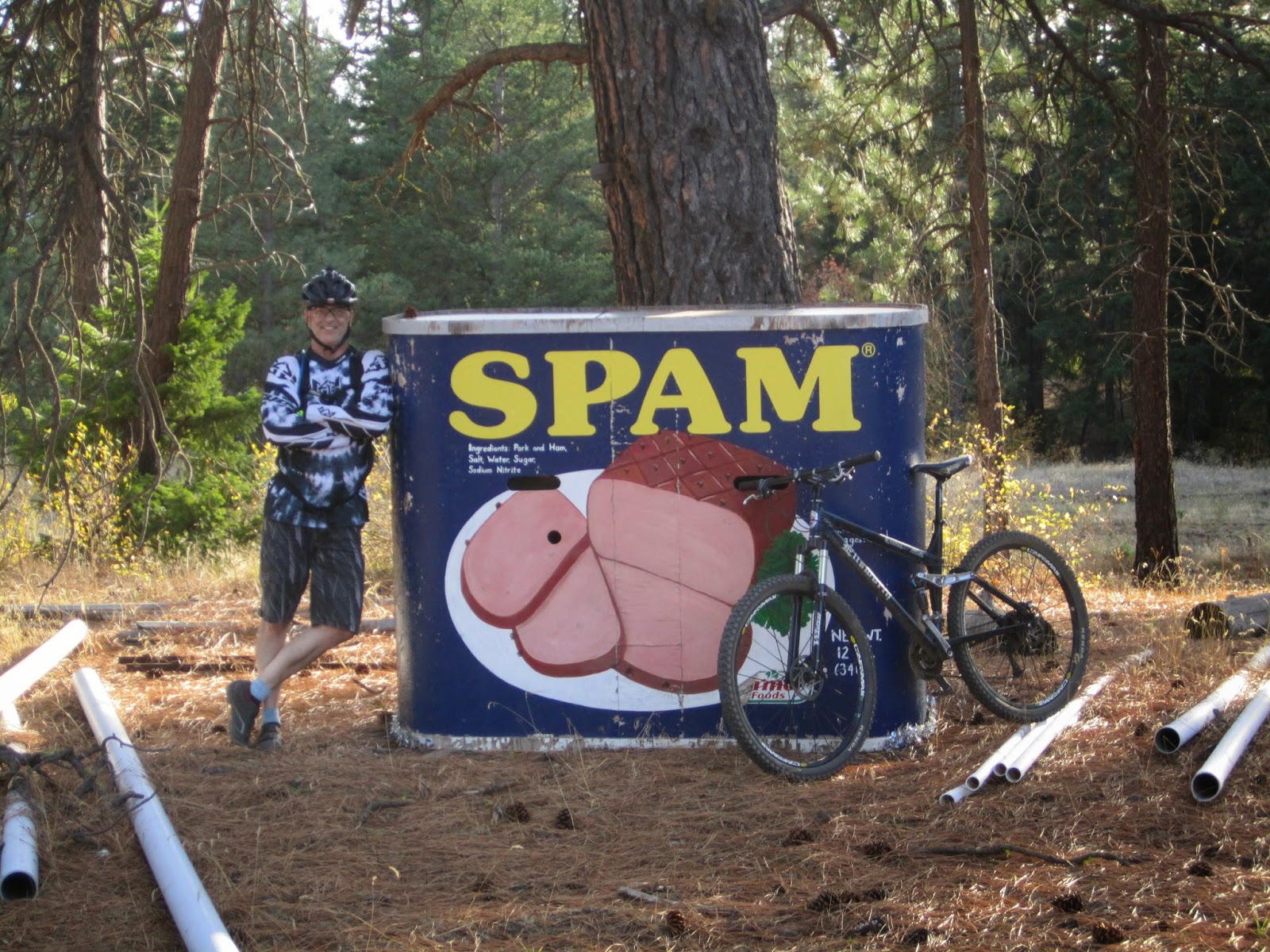 Post ride we were into Roslyn to eat and drink at The Brick.  Of course, one can't go to Roslyn without taking a photo of the mural. You who know the TV show Northern Exposure can appreciate. 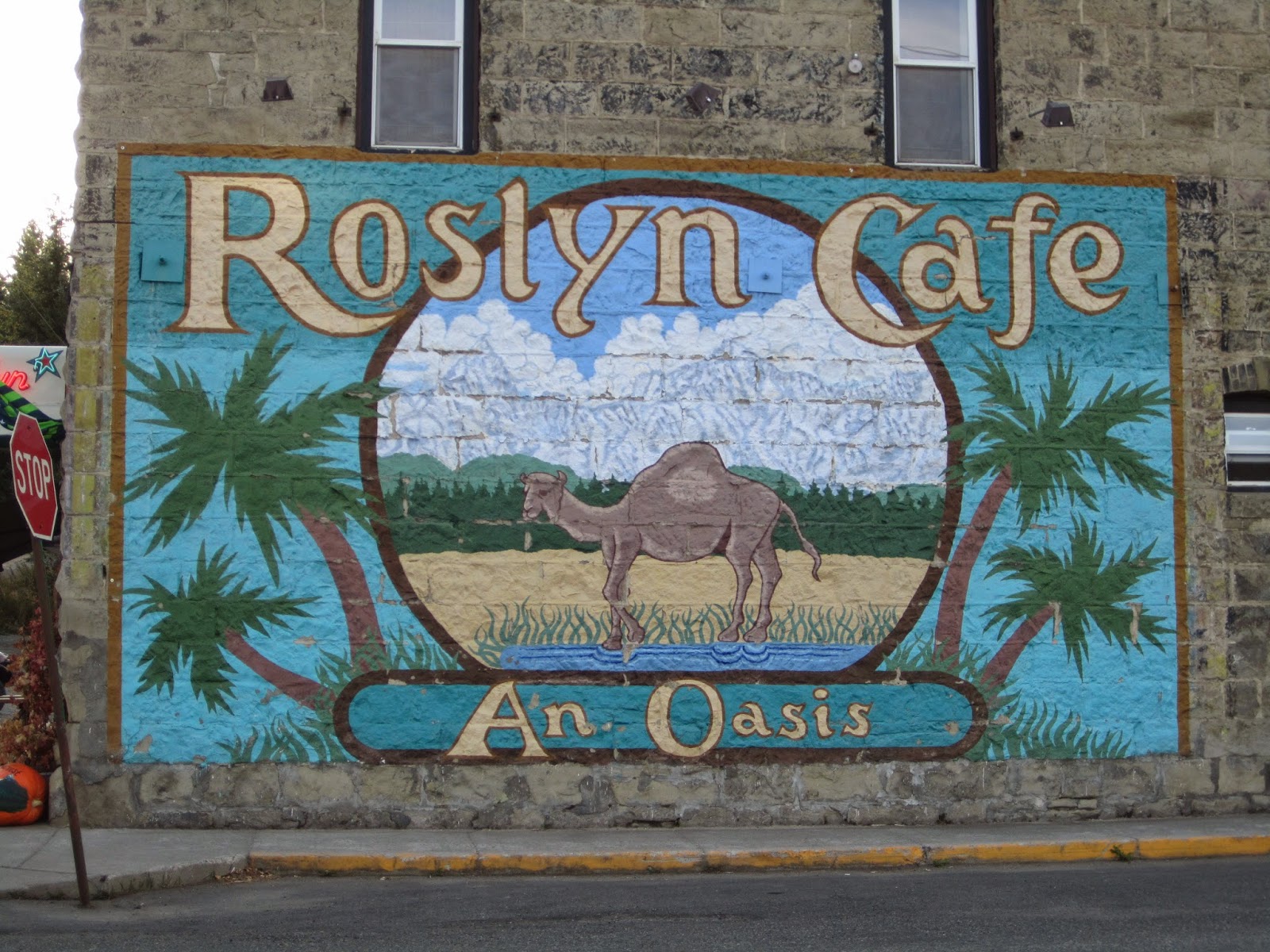 Our crew had rented a house near Leavenworth.  With enough people it was very affordable, very private, and had all the amenities a mountain biker could want.  Some of our group went to Octoberfest Friday night.  The report - stupid expensive and too many drunks crowded into a confined space.  We bought our beverages at the grocery store.  We rode hard all day and partied hard each night at the rental property. 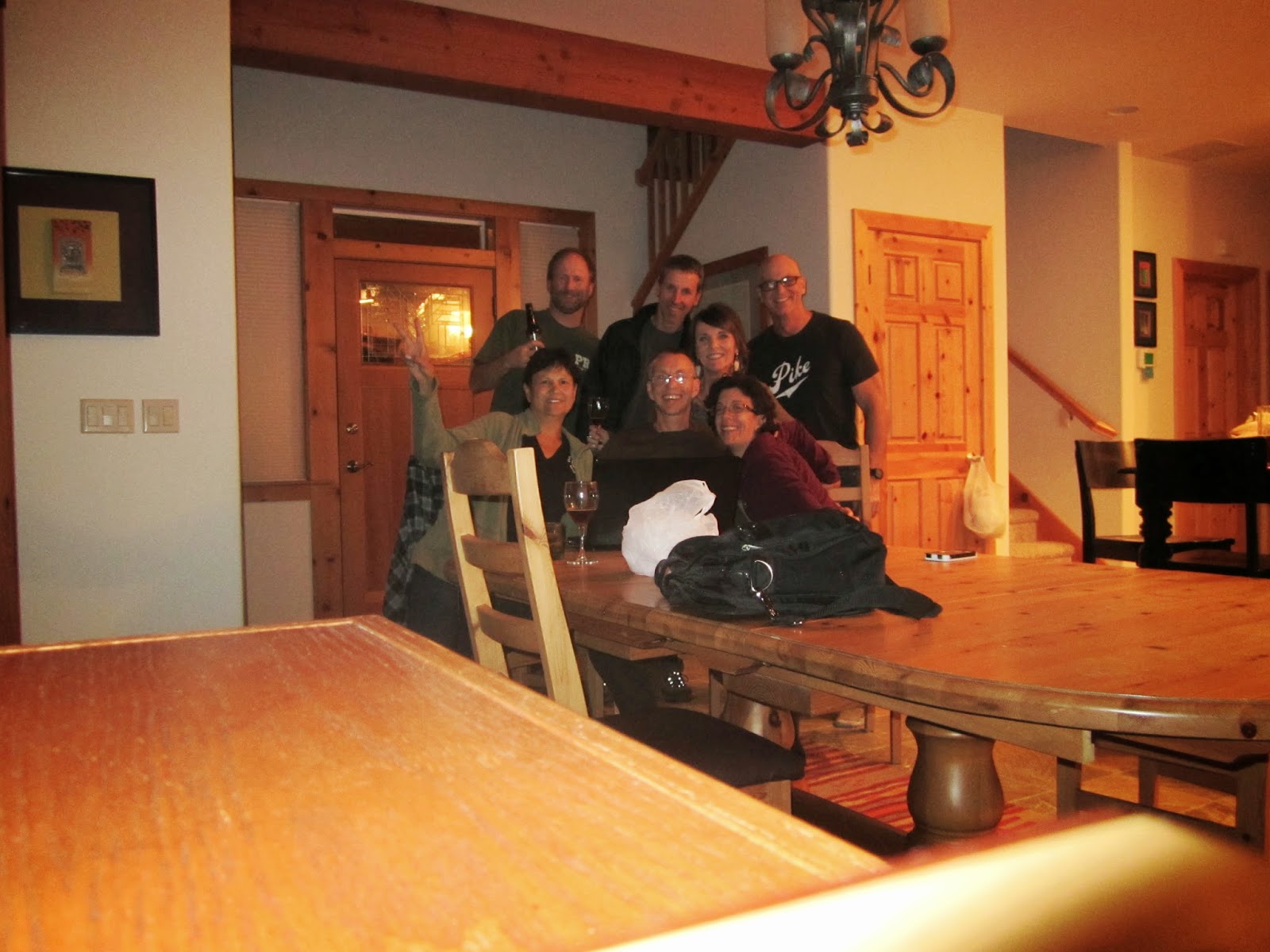 The Leavenworth area has some pretty fun trails.  We rode Devil's Gulch, after riding up a gravel road for hours, on Sunday.  Saturday was a mixture of looking for a trailhead and bad weather.  No riding Saturday. 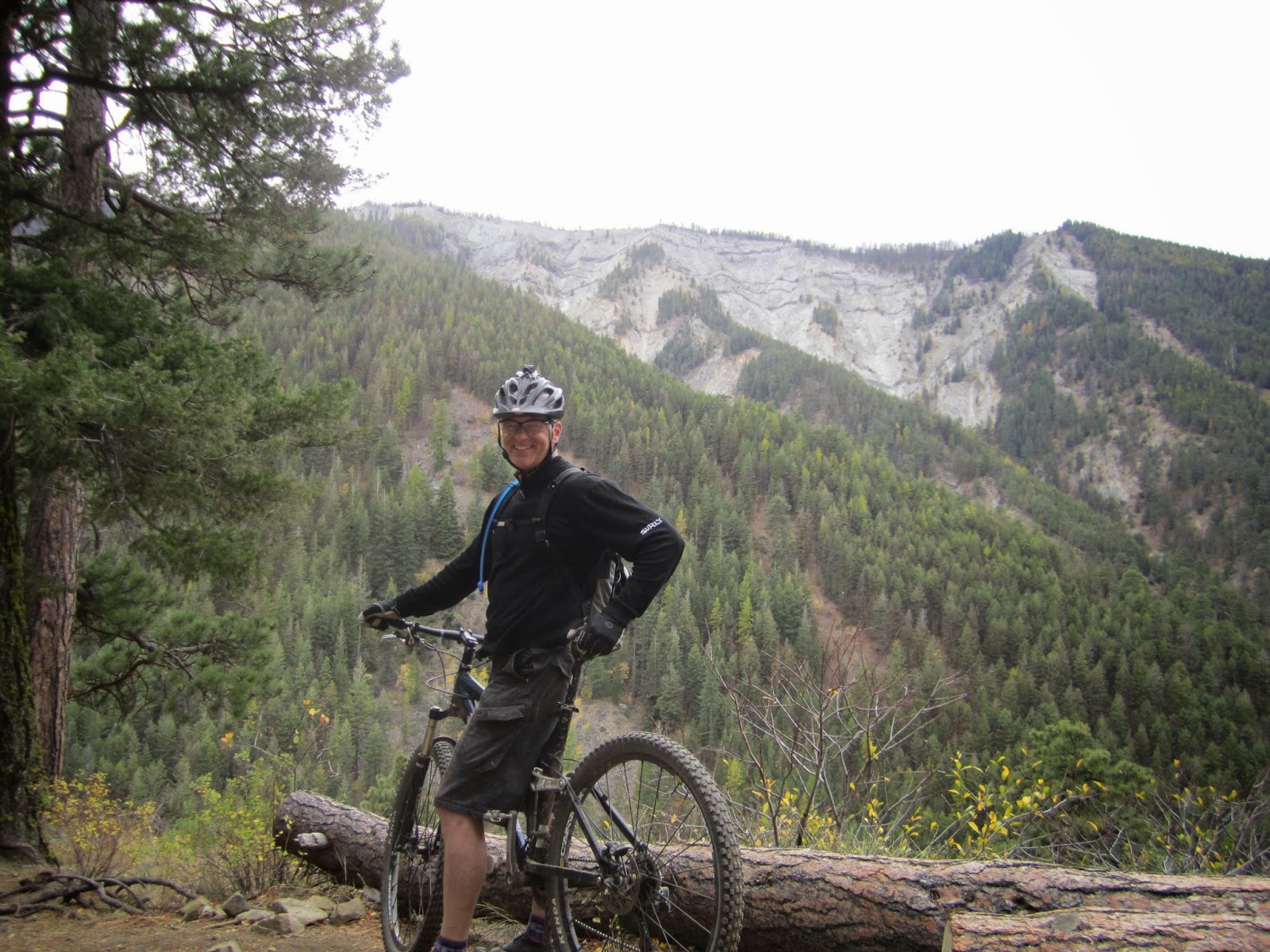 Monday we did what we did every day, drive to the trail, climb for hours, and then bomb down a trail.  The trail for Monday was Xanadu.  Xanadu is a (mostly) downhill type trail right on the spine of a ridge. 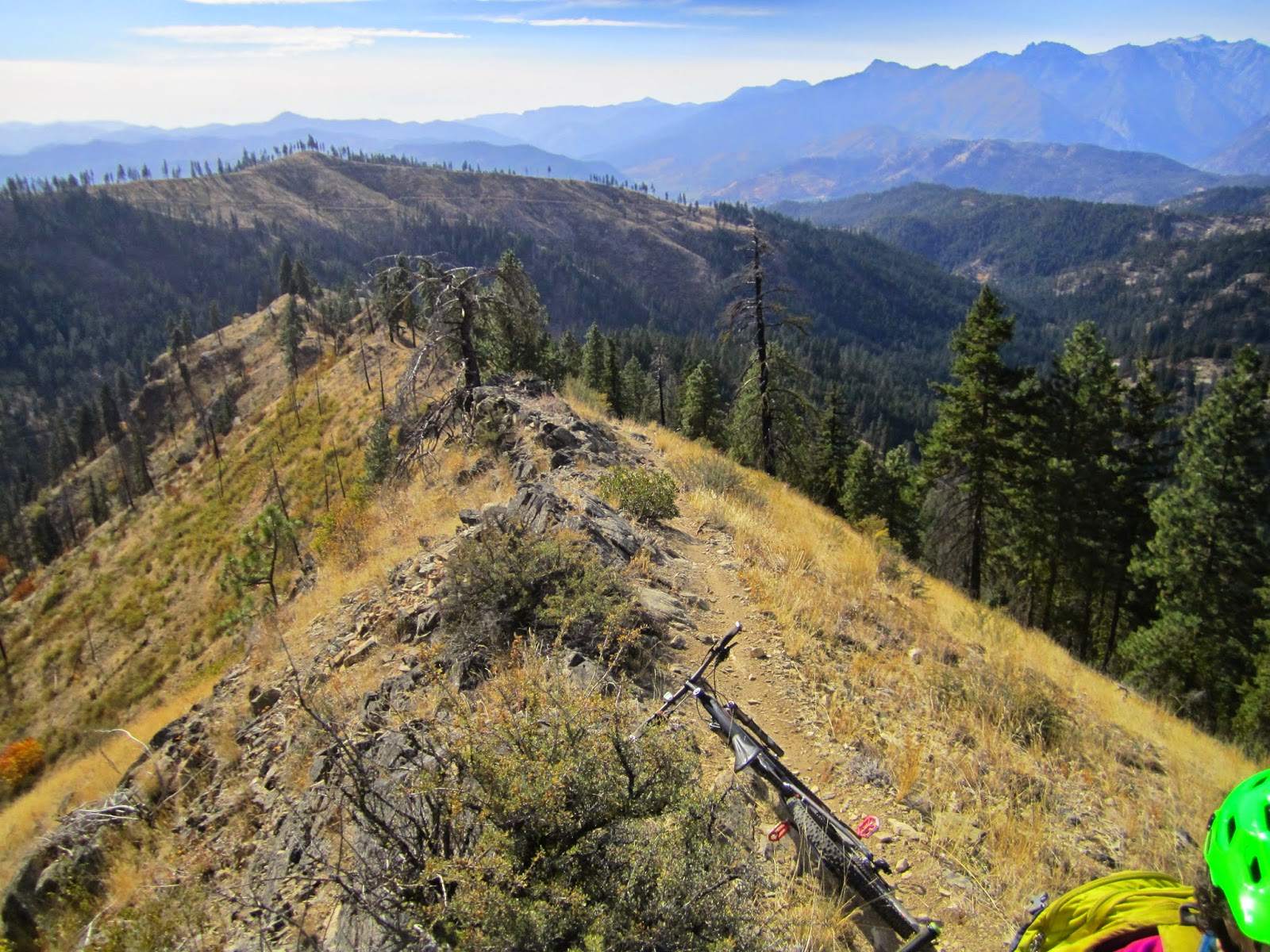 At times the trail is technical, other times is very fast, some of it is VERY exposed either right on a knife edge or just off the knife edge on loose, rocky terrain.  There pictures were not the hard parts. 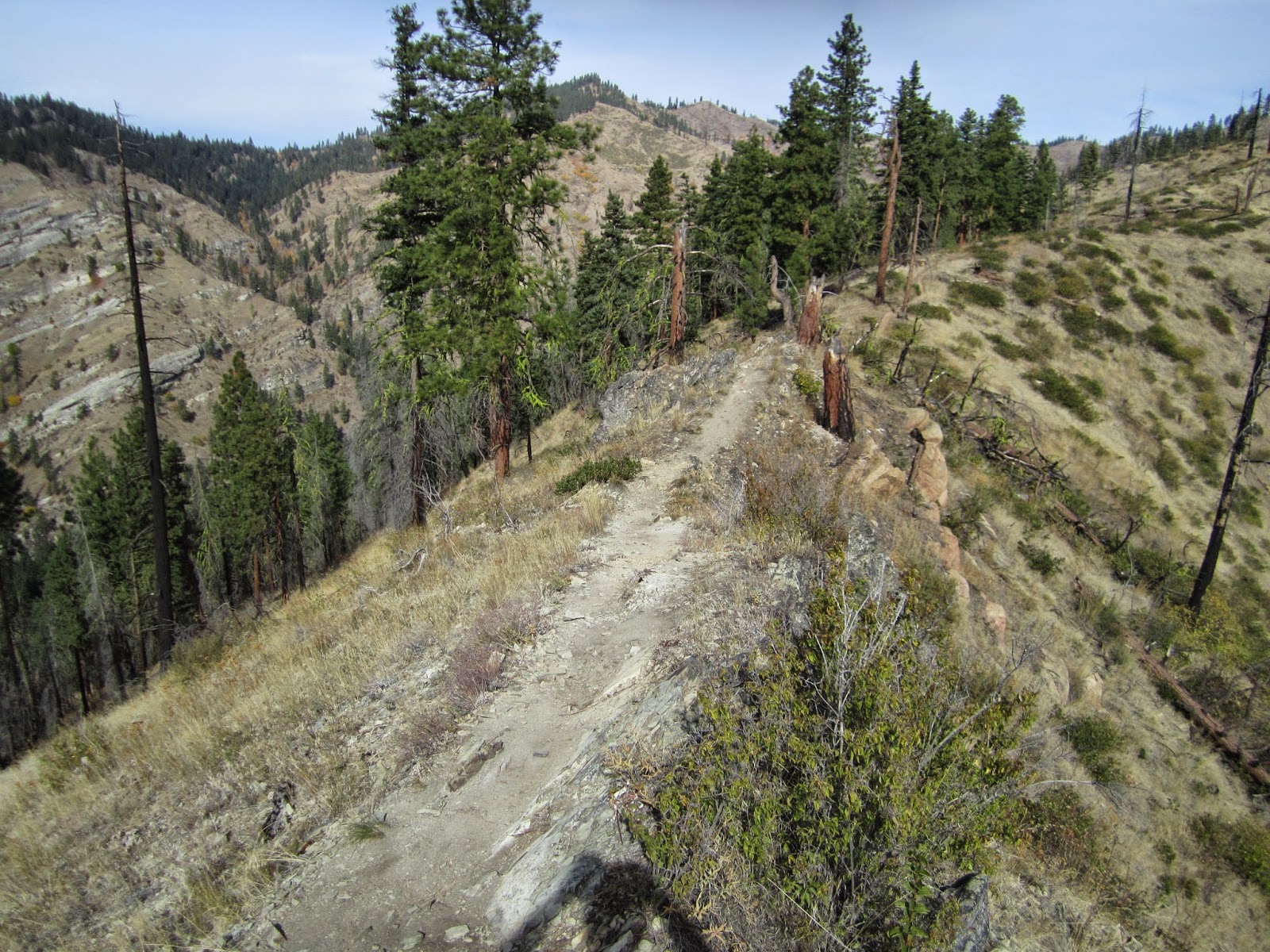 Xanadu was a tough trail to ride.  But, it was great fun!  My adrenaline levels went through the roof at times.  There are sections of this trail we all walked.  They were ride-able, it was just mistakes would have had dire consequences.  I thinking I'll be back next year to ride this trail.  However, I'd like to have a bike that's for sure "all mountain" and pushing toward "downhill" for this trail.  Also, I'll have body armor and a full face helmet.  This trail has much to offer if one has the right equipment.
Posted by Snakebite at 8:28 AM No comments: